In the first practice in China, Ferrari unveiled their new rear wing, which features a blown flap in a similar manner to McLaren.  Mclaren have infamously produced the F-Duct which uses a duct controlled by the driver to alter airflow around the rear wing to stall it at high speed to gain more top speed.  Is this an F-Duct as used by McLaren, may be not.

Unlike the McLaren and Saubers set ups, the Ferrari solution does not appear to have the driver interacting with the duct.  Instead the wing is fed with airflow coming from an inlet high up on the engine cover, well away from the drivers reach.  It is possible that the there is additional ducting inside the car that does allow the driver to control airflow through the duct.  But so far no signs of a driver controlled inlet around the cockpit are evident.  It could be Ferraris set up uses pure aerodynamics to affect the duct, by choking at high speed (safely well above the maximum corner speed).

Latest: Alonso to Autosport.com  “I had nothing inside the cockpit because the system is not complete. We tested the engine cover to compare it with the standard one. I didn’t notice anything. I guess there will some new numbers from an aero point of view.”

We will update this post as more info emerges over the weekend. 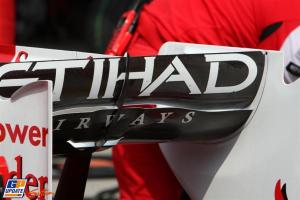