In the latter part of the year suggestions were that teams were discarding the rear side springs to allow very soft rear ends.   This has proved to be the case, in the past few years teams have been removing their rear torsion bars to gain greater control of suspension set up.  This revolution has been quietly spreading as many teams have gone this route.

An early sign springs were being removed was  the I-Racing game, which accurately modeled the FW31 with the Williams teams assistance, the game provided no scope for rear springs.   Equally comments made by Anthony Davidson over the Abu Dhabi Grand Prix weekend suggested that McLaren’s extreme stiff front\soft rear was due to this set up. Leading to Buttons problems locking up the inside wheel under braking. Closer investigation with technical people close to the sport prove this to be case and the practice is widespread amongst several teams, already McLaren and Williams are highlighted as adopting this practice, but Toyota and red bull are sporting this set up, by virtue of their gearbox supply this suggests that force India and Toro Rosso have the option too. Although this seems to be a relevantly recent practice as most teams first designed this into the 2009 cars, albeit it may have been tested or raced before then.

Suspension on F1 cars has the joint purpose to control the cars attitude both for aerodynamics and tyre dynamics. These often contradictory requirements have lead to compromises, largely against tyre performance and more to the benefit of aero control. Aerodynamicists want the car to run flat (or raked) with little change in roll or ride height. For mechanical grip the car needs softer attitude control. This has lead F1 cars to run quite stiff front ends and softer rear ends, both in roll and heave. A soft rear ARB creates more mechanical grip, which then in turns needs to be controlled by a stiff front anti roll bar. For aerodynamics reasons the front wing and splitter like to be flat to the track surface to gain most downforce, thus this also tends to require a stiff anti roll bar.
At the extreme end of this set up characteristic this has been exhibited most clearly in McLarens handling. The car gains traction from the soft rear anti roll bar, but the stiff front roll bar means that the rear heavy car tends to roll at the rear and this picks up the inside front wheel going into turns.
On a side point although McLaren run what has been called a stiff front axle, their apparent problem with grip over bumps going into turns is not necessarily a reflection of this set up, more that the cars aero requires tight ride height control, it is possible to run stiff anti roll bar and still have a compliance for coping with bumps.

Heave is when the car moves vertically, thus both wheels are rising or falling together
In a typical rear suspension the effect of heave is that the heave spring (blue) and each side spring (yellow) is providing stiffness. The dampers (Red) damp the motion.

Roll is when the car tilts, thus one wheel is rising and one is falling
In a typical rear suspension the effect of Roll is the ARB (orange) and the side springs provide the stiffness. Again, the Dampers (Red) damp the motion

Single wheel bump, which tends to be for riding kerbs or bumps in the track is a secondary requirement to heave and roll control, spring rates are not normally tuned for this requirement, instead the cars dampers allow freer suspension movement when the wheel suddenly rises up at a greater rate than normal, the damper has different rates for the wheel rising at different speeds, known as low speed (the cars chassis moving slowly i.e. pitch roll) high speed (bumps) and often a tertiary setting known as ‘blow off’ where the damper will provide a far lower damper rate for extreme wheel speeds such as kerbing. 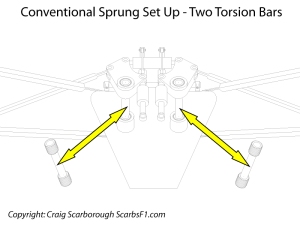 When you do away with the side springs, the heave and roll bar rates are higher in order to replace the spring rate added by the side spring. As long as each of these devices has a wide enough range of springs then there is no loss in control. 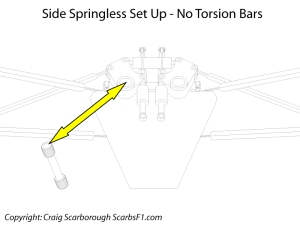 It’s noteworthy that both rear dampers are used, in the nineties we saw monoshock front ends, which utilised both a single spring and single dampers. But monoshocks only have one damper so the control of roll is undamped. With a side spring-less set up there’s two dampers, controlling roll motion. Which is an obvious improvement in vehicle control over Monoshocks.
Although there are some set backs with a side spring-less set up, some suspension designers want a non linear rate to the heave and wheel rates and sometimes different rising rate curve for each of these elements. This is achieved by the linkage (pushrod or pullrod) and the rocker geometry, going for side spring-less set up prevents having differing wheel and heave spring rising rates. In some engineers opinions, this is the removal of a needless layer of complexity.
A heave element not only supports the rear axle heave motion, but the element provides a non linear rate. Ground clearance is used up through downforce compressing the suspension as speed increases. The heave element has a range of free movement, this is taken up as ride height lowers until the then the heave spring itself (or Belleville stacks or bump rubbers) come into effect and add considerable rate to the heave motion. This prevents grounding or choking the underfloor through low ground clearance.
Equally making set up changes is both simplified and complicated. Engineers can now change either roll or heave rates independently, before changing a changing torsion bar effectively altered both. But changing a torsion bar, while not a quick task was the switch of an isolated component. Now teams will need to change the entire heave spring or ARB assembly.
An additional benefit is if a team wants to commit fully to the side spring-less set up, the packaging of the suspension becomes far easier, no longer having to package long torsion bars. This is perhaps a reason why Red Bull were able to effectively package the pullrod set up, as the pivot for the rocker is near vertical, fitting a torsion bar in this position would have been be tricky.

With the design of next years car leading towards a widespread adoption of pullrod, the option to adopt side spring-less will be attractive to aid packaging. Although the side spring-less pushrod set up will also allow dampers and rockers more freedom to be packaged at the front of the gearbox casing. Adoption at the front of the car is possible too, there is lesser need as the front roll rate is higher and the torsion bars can add to the effective rate. But simpler packaging and tuning may still be attractive for a designer.