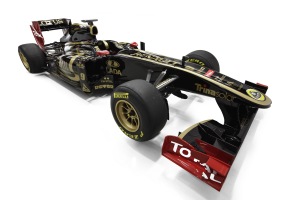 What was formerly the Renault F1 Team and now Lotus Renault GP (I’ll use the term LRGP for this article) have unveiled their new car the R31. It seems some critical details are not fitted to the car for its unveiling, indeed the car was shown only briefly to the press before it was covered back up and returned to the garage. Despite the mystery surrounding the cars exhaust exit location, its clear this is a very new design for the team. In creating this the team were given a mandate to take risks, which probably explains the very different front and rear end treatments. But in packaging the chassis to take KERS and meet the new weight distribution rules, the car has altered only 50mm (longer) and the major masses remain in largely the same locations. 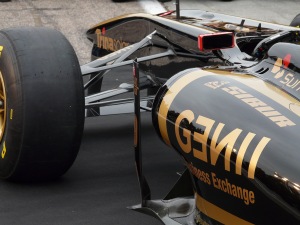 The Raised "V" nose and undersut sidepods are apparent

While James Allison talked up the risks taken with the car, parts which I’m told are yet to be seen on the car, the basic R31 is a step change from the designs of the R29 and R30. Firstly the low straight nose, complete with integral turning vanes has gone. This is replaced by a more contemporary highly raised “V” nose, with the underside of the “V” being particularly rounded and the concave upper surface continues all the way to the nose tip. Only a simple set of turning vanes are fitted amongst the front suspension, but there’s now a lot more space to place additional vanes under the nose. As with most launch cars the front wing is a variation of last years wing and will not remain as it is for the whole of testing. As with last year the steering rack has been placed low in line with the bottom wishbone. 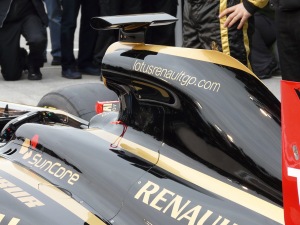 A simple roll structure, albeit with a strange stepped bodywork line

Around the cockpit the be-winged mirror mounts seen on the wind tunnel model are not present, but LRGPs usual large pointed mirror pods are carried over. The sidepod fronts are highly unusual, the inlet shape has gone towards a “U” shaped inlet, rather the “P” shape used by LRGP for several seasons. Additionally the inlet features two peeks, similar to those used by Ferrari. The resulting shape is highly undercut and the sidepods lead back to a exit the tapers outwards to meet the floor, the bulbous coke bottle exit of the past two cars has gone. 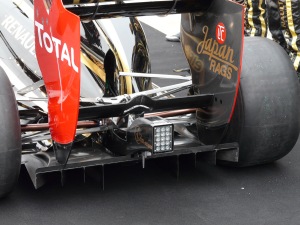 Although small cooling outlets next to the cockpit are evident, there were no other apertures made into the sidepods at all. Their unusual tapered exit, created a wide low duct exiting across the top of the diffuser. This low line effect is further accentuated by the move to Pull Rod rear suspension, the engine cover being wider at the bottom and very low around the gearbox. A simple tall cooling exit vents at the end of the tail, with in this is the oil cooler fed by the F-duct-like inlets aside the airbox. For the wing endplates, LRGP appear to have followed a red Bull solution by joining the endplate to the top of the diffuser. Curiously LRGP have not used a rear wing mounting pylon, the exposed beam wing, sits on two supports to mount to the rear crash structure. Around this area the Titanium of the gearbox is exposed to the airflow. It appears as though the differential is lower this year, although Allison couldn’t confirm this. Compared to the simplistic Ferrari diffuser, the Renault under tray is far more developed. Starting narrow and sweeping out to the maximum width, the diffuser is complemented by several fences. 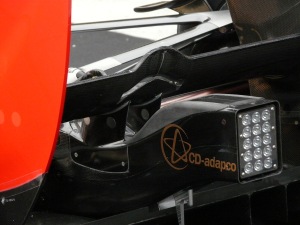 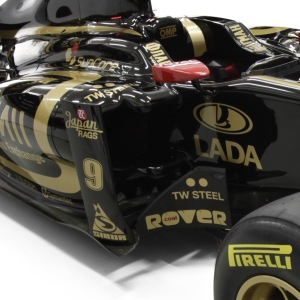 Amongst all of this detail no exhaust pipe is apparent, This is clearly one of LRGPs trump cards. I understand the exhaust does not exit at the rear of the car. This leaves few reasonable option for the pipes location. Either above the gearbox or increasingly rumoured the exhaust routes forward and exits in front of the sidepods. I presume the aim if this were the case, would be to pull airflow from under the nose to create some front downforce and speed the flow up back towards the diffuser. We are being told to expect new parts on the car for its first tests. These are apparently both the exhaust and some parts at the rear of the car.

Aside from the Pullrod rear suspension the main mechanical changes are to accommodate KERS, the Renault engine again having the nose of the crank coupled to spur gears to drive the MGU. The MGU and power control unit PCU are all mad ein cooperation with Marrelli.  While the Battery pack is mounted beneath the fuel tank area. The Renault engine has not had any dispensations this year to increase power. Only the normal changes to package KERS and resolve any reliability issues are allowed.