Now simply known as Sauber Motorsport the Team are embarking on their second as a born-again independent. Their new car, the C30 has been completed under the technical leadership of Ex-Force India TD James Key. James bring his experience from the budget conscious FIF1 team and its forebears Jordan\Midland\Spyker.  Aiding key are two Long term Sauber staff, as Christoph Zimmerman as Chief Designer and Seamus Mullarkey leading the aero dept.

Development was held back last year as the team focussed its resources on the new car, which first hit the wing tunnel in May. This switch in resource was partly the reason the exhaust blown diffuser was not developed in 2010. Their new car sports just such a device, with an interesting twist. Otherwise the car is largely a logical evolution of the already quite advance concept of the C29. With Key having sorted the Ferrari engine installation problems and the cars ride height sensitivity which blighted the teams early season last year, Now the team can expect a strong run in the midfield for 2011.

A slightly higher and "V" sectioned nose for the C30

Sauber went the right direction with the front of the chassis last year. So this C30 doesn’t look too different in this regard. The front end is slightly higher, with eh slight “V” section, while the nose cone is slightly wider. Current the turning vanes and front wing are carried over from the C29, so we can expect Sauber to also adopt some more typical concepts for these parts, especially the turning vanes which currently differ to the conventional shaped vaned adopted by most teams. Also the philosophy of evolving the monocoque extends the roll structure, the roll hoop is now supported by four pylons, creating an exaggerated undercut for better airflow to the rear wing.

Either side of the tub, the sidepods now sport a slightly squarer profile, the inlets being “U” shaped rather than triangular as they were last year. Yet this bulkier shape still allows for a huge undercut, leading back to a slimmed coke bottle shape, which now ends with a vertical slit to allow cooling air to escape early, and also allowed the exhaust to exit close the floor and the cars centreline. Also aiding cooling is the enlarged exit above the gearbox.  While the top body exhibits no form of shark fin. Routing hot air out through here, keeps the tail of the coke bottle shape slim, for greater airflow over the diffuser.

Cooling exit over the gearbox keeps the sidepods slimmer

In fact the diffuser is not quite as simple as the first pictures suggest and during the unveiling the diffuser was covered with a tarpaulin. However, I was able to look down onto the top of the diffuser. Sauber have kept the gearbox and sidepods so narrow that they have created a channel between the outer tunnels, which the exhaust blows through. This would work the centre section of diffuser, which is typical struggling for airflow, by the lower ride height of the step beneath the car.

Above this the on-trend exposed beam wing has been created by shaping the crash structure within the rules to bend underneath the wing. Currently the beam wing is a simple straight slot-less affair. This could be made work harder in conjunction with the blown diffuser, by adding a longer section in the middle 15cm of the wing.

Exposed beam wing is a big trend this year

Another rear wing aid to the diffuser is the addition of a series of vanes hanging below the endplates. These sit within a legal loophole in the rules, and effectively make the diffuser longer than the rules envisaged.

The upper rear wing, is adjustable and this system is known with the technical F1 staff as the ‘Drag Reduction System’ DCS. Saubers is a elegant solution to making the flap hinge about its trailing edge. A simple metal lever moves to open the slot gap up, reducing drag and boosting top speed. 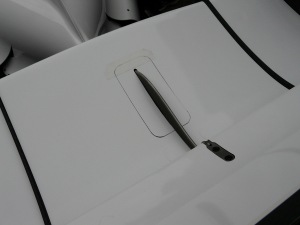 Mechanically the car retains the Ferrari drive train. So again the car will sport the Ferrari gearbox, which is a hybrid Titanium and Carbon fibre construction. Therefore Sauber will adopt Ferrari KERS and their inboard rear suspension geometry. Technical Director James Keys explained the pushrod mountings, place the hardware at the very front of the gearbox, this keeps the parts accessible, but does not affect rear aerodynamic volume. Key also confirmed Sauber have designed and built the suspension that attaches to the Ferrari gear case, while the Hydraulics and Electronics are all Sauber designed too.

Sauber continue to use OZ Racing wheels with hollow spokes