When the RB7 was launched the cars apparent lack of any innovation was surprising.  Yet the car ran in its launch guise during the first day of testing.  Then, in only the tests second day, the RB7 evolved with a new diffuser and exhaust system.  Despite rule changes Newey has found the loophole that allows exhausts to blow inside the diffuser for more downforce.  Although the rules were revised for 2011 to try to prevent double diffuser and openings to allow the exhaust to blow inside the diffuser.  The rules did permit openings in the outer 5cm of the diffuser, an area where teams have recently split the floor and created raised lip, coincidentally a practice first exploited by Newey on the RB5.

In my 2011 trends and solutions post (see https://scarbsf1.wordpress.com/2011/01/27/2011-trends-and-solutions/) I proposed this area could be exploited if the exhausts could be routed there:  ” The only openings in the diffuser are the starter motor hole and a 5cm area on the outer section of floor. Exhausts could be routed to this outer section of floor, but routing the large diameter exhausts across the floor could create their own blockage effect in-between the rear wheels. Offsetting the benefit they are supposed to provide.”

It appears Newey had the same idea and has presented the modified RB7 with flattened exhausts reaching rearwards under carbon overs (shown yellow in the above picture)  these reach towards the outer 5cm of floor and blow under the raised lip in the floor.  The fast moving exhaust gas then curves inside and blows out via the sidewall of the diffuser (shown below with the red arrow).  Blowing inside the  diffuser this way helps accelerate the airflow out of the diffuser and increases downforce.  As with last years EBDs they will be sensitive to throttle openings and Renault have assisted as much as possible in accommodating the aerodynamics with a special overrun strategy, to keep the exhausts gas velocity as high as possible without overheating the engine (see https://scarbsf1.wordpress.com/2010/07/10/red-bull-map-q-the-secret-to-the-teams-q3-pace/).  Renault were also understanding in developing an engine mapping that would work with far longer secondary exhaust pipes, without losing power or drivability. 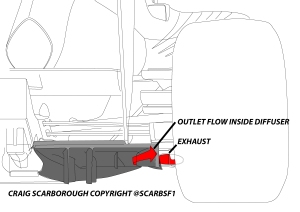 In a strange coincidence with the Lotus Renault team, the exhausts has been extended by up to 1 meter and equally has a flattened oval exit, with the central separator (https://scarbsf1.wordpress.com/2011/02/01/renault-r31-front-exit-exhausts-fee-explained/).