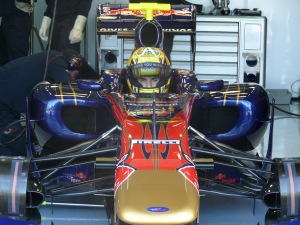 Scuderia Toro Rosso (STR) launched their car on the first day of the Valencia test. It’s significance has been somewhat lost amongst the fanfare of the front running teams cars and the innovation of the midfield runners. However the new STR06 deserves more attention, as it has some unique aerodynamic concepts that are drawing praise from other teams engineers. STR have been able to reduce the cooling and packaging demands placed on the sidepods. Thus with a smaller sidepod envelope, the team have revived an old concept from Ferrari, the double floor. This separates the sidepod from the flat floor of the car to improve airflow towards the rear. Pioneered by the Jean Claude Migeot while at Ferrari, the twin floor concept came about in 1992 for the teams F92A. Although not a success, mainly due to mechanical reasons, the car did exploit clever sidepods to improve flow over the diffuser.

Diffusers are limited in length and exit height, as such there is little that can be done with their internal geometry to create a greater volume for more expansion-ratio and hence more downforce. Teams realise that driving more airflow over the diffuser not only creates higher pressure above, but can also drive airflow within the diffuser with aids such as gurneys on the trailing edge of the diffuser opening. The problem is getting airflow with enough energy to pass over the diffuser. To reach the diffuser, the air has a tortuous journey. Starting with passing over the front wing, under the nose and raised chassis, then over the splitter and around the sidepods, before sweeping in between the rear wheels and through the rear suspension. We’ve seen other solutions aimed at improving this path, such as the extreme raised nose, tight coke bottle shape and recently the undercut sidepod. It is the sidepods that create the biggest obstacle to the airflow, sidepods span some 30-40cm beyond the sides of the chassis and in order to package large enough radiators they tend to need the full width across a significant height, making the sidepods effectively a rectangular block to the airflow. If you could remove some of this blockage, especially low down then the airflow can head unimpeded to the diffuser. This is exactly what Migeot did with the Ferrari F92A and Ascanelli has done with the STR06. The Toro Rosso’s sidepods curl in backwards towards the monocoque along their full length, this space is evidenced by the large area of flat floor beneath the sidepods. Air passes under the sidepods directly to the diffuser with little to sap energy from the airflow.
With any advantage comes compromises, as it is the case with the double floor. These compromises being the space available within the sidepod and centre of gravity height. Space within the sidepod is already taken up by extra wide fuel tanks and various electronic boxes, not to mention in STRs case the rounded sidepod profile which further robs space. STR must have somehow been able to package large enough radiators to meet the Ferrari engine and KERS heat rejection requirements. Indeed at the first test the team soon blocked up the sidepod openings with moulded panels to reduce the inlet size.
Centre of Gravity height is clearly compromised, as the sidepods sit some 10-15cm higher than normal, This weight needs to be offset with ballast placed low down in the car. The increased minimum weight limit this year (640kg) will help, but conversely running KERS will not help in this regard. As with many of this years concepts, the double floor can be copied. As it does not impact on the homologated monocoque, although the teams side impact crash structures may not be optimised for this sidepod shape. Just as with McLarens “L” shape sidepod, any switch to this format would be a major undertaking. Which would also only be possible if the engine can cope with the downsized radiators. 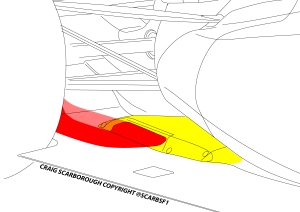 Other details on the STR06 were the ducted exhaust outlets. On the cars initial runs the exhausts exited low and along the floor, contained within box like covers and blowing through long rectangular outlets. In later tests the car was tried with conventional periscope style exhausts, protruding through the upper part of the sidepod exit.

At the rear, the diffuser in interesting, STR have created a slotted gurney flap, air passes under and over the gurney for a greater effect in drawing air from within the sidepod. Perhaps a sign of the more powerful airflow now reaching the top of the diffuser. They have also exploited the middle 15cm behind the diffuser, this area does allow extra channels to be created, so STR have added a simple “U shaped diffuser trailing the main underbody.