Through out 2010 and in the opening races of 2011, Renault have been extremely productive in producing front wing updates. With revisions at the rate of one per race so far in 2011, no other teams has produced the number of iterations that Renault have managed to roll out. In China Renault produced a revised endplate, this was subsequently revised for Turkey along with new wing mounting pylons. For the Spanish GP, there will be yet more updates in this area. 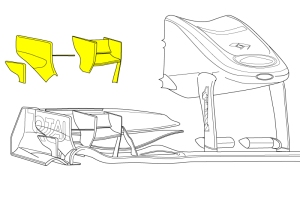 Renaults front wing has been the leader of the current evolution of endplate-less front wings. where as teams used to have a clear distinction between the front wing elements and the vertical endplate, now teams curl down the tips of the wings to form the lower part of the endplate, then add vanes for both bodywork legality and to direct airflow around the front tyre. then the team add small cascade winglets and the entire picture of how the front wing is working becomes complicated. If we remove the vanes and cascade winglet to view them individually, this situation becomes a little clearer.

Another Renault feature has been to split the footplate, last year the footplate sloped down and the tubular-like rim was fitted to the meet the bodywork legality dimensions. Now the team simply slot the footplate to allow airflow to pass low around the front tyres.

Renault also now exploit the camera position by placing the two mandatory camera pods behind the neutral Drawing7 section of front wing. positioned here the camera pods offset the lift created by the neutral centre section of wing. Also interesting to note is the front bulkhead shape of the R31, the “V” nose is unusually rounded at the bottom, as can be seen by looking at the lower rear face of the nose cone.

In Turkey the front wing gains a small flap added the smallest outboard vertical vane. As well as faired extensions to the pylons that mount the wing to the nose. similar to Ferrari sinterpretation of the mounting pylons this, although Renault did extended the pylons to form s vanes, albeit in a slightly different manner in 2009-2010.