Renault have for some time been the team leading with innovations in front wing design. Renault first introduced the feathered set up on the inner tips of the wing last year, by tapering the slot gap between the flaps. Many teams have already copied the feathered design.

But now Renault have gone even further with the concept. In recent races the team have produced a new take on the flap design. The version raced since Germany has split one of the flaps into two. This along with the slot in the main plane creates a stack of five elements for a small span of the front wings width. But in contrast to other uses of extra slots in the front wing, this is not to create a section producing high downforce. Instead each of these steps is designed to create tip vortices to drive airflow along the Y250 axis. 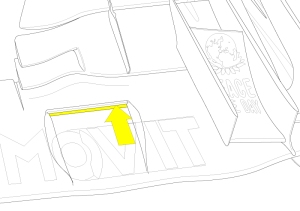 Teams tend to create the greater amount of downforce towards the front outer wing tips. This pressure distribution reduces the load on the inboard end of the wing, in order to better manage the airflow over the centre of the car. However what teams do want to do is to use the relatively undisturbed airflow along this axis and use it to drive airflow over the centre of the car. A steeper wing towards the neutral 50cm centre section of wing would produce unwanted turbulence and rob the airflow of energy. The bodywork rules do allow for some creativity with the vanes and other bodywork allowed along the edge of the monocoque. Known as the Y250 vortex, as most of the aerodynamic effects are created along a line starting 25cm from the cars centreline (Y= lateral axes, 250mm). Components that work along this axis include the front wing mounting pillars, any under-nose vanes, the T-Tray splitter and the intersection of the front wing and the neutral centre section. Flow structures along this axis drive airflow under the floor towards the diffuser and around the sidepod undercuts. Each with the aim to create more efficient rear downforce.

There are effectively five elements created by the four slots (arrowed)

If Renault created a single front wing element with the same angle of attack, a single large vortex would have been produced. This would be far more powerful and pointed outwards a smaller area downstream on the car. By splitting the wing into smaller separate sections, several smaller vortices are created. These are each of lower energy and are spread over wider area. Perhaps this softer approach creates less sensitivity as the cars attitude changes. It will be interesting if any teams has been able to replicate this design by the time their new bodywork arrives at Spa.