It’s now clear the Mercedes DRS-Duct system does in fact feed the front wing to stall the wing for better aero performance. Pictures have emerged showing how the system links the front wing to the rear wing.
Mercedes launched their 2012 car late, by missing out on the first test. It’s not clear if this delay was due to the need to repackage the car around the DRS duct, but clearly the Mercedes car needed some special adaptation to accommodate the car ducts along the car.

As I’ve already reported (https://scarbsf1.wordpress.com/2012/03/14/mercedes-f-duct-front-wing-operated-by-the-rear-wing-drs/) the Mercedes W03 has a unique system linked to the DRS. This uses the opening of the DRS flap on the rear wing to open a duct that sends high pressure air to other parts of the car. It was logical for many people to observe this was similar to the 2010 F-Ducts and stalled the rear wing for greater speed. As I pointed out in my first article on the system, I believe it is the front wing that was receiving this airflow in order to stall the front wing.
We saw from pictures of the Schumacher car in Melbourne, that there are slots under the front wing, this proves the front wing stalls, but not by which method; either the passive nose hole apparently tested last year or the DRS duct.

We can now see from images of the carbon fibre ‘cage’ fitted to the front bulkhead of the Mercedes that two tubes emerge and curve down to feed the flow into the front wing via the nose cone.

However this does not discount the rear wing is also being blown and stalled by the DRS duct, but I have yet to see any evidence of slots in the underside of the rear wing profiles or endplates. AUTOSPORT reported these were seen in testing, so perhaps there remains the chance the system could be used for both wing front and rear.

A complete explanation of why Mercedes use this system is in my first article on the subject.

How does it work?
When the driver has the DRS flap closed on the rear wing, the front and rear wings operate as usual, with no blown effects being used. Both wings create downforce in the usual way.

When the driver opens DRS, the flap uncovers a pair of openings on the rear wing endplates. A passageway moulded inside the unusually thick endplates, creates a duct that feeds the DRS-duct system. These openings are fed with high pressure air, which has formed on top the rear wing. 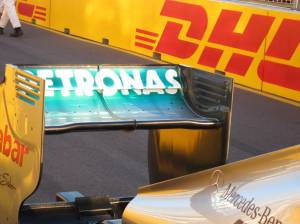 As DRS rear wings use a very short chord flap, the main plane of the wing still has some angle of attack towards its trailing edge. This high pressure region feeds the ducts and each side appears to have its own dedicated duct from rear wing to front wing. There being one left and one right side duct, although it’s possible these ducts are linked to balance the system, left-to-right, as in yaw one duct might not have the same pressure feed as the other.
The endplate ducts flow in a “question mark” shape around the top and front of the endplate towards the beam wing. The airflow then passes inside the beam wing profile to a bulged fairing that directs the ducts forwards under the engine cover. 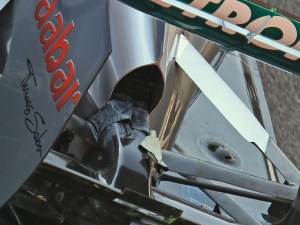 The beam wing duct leads (where the loose tape is) into two further ducts passing either side of the car Copyright Octanephoto.co.uk

These ducts are clearly visible from rear view shots; indeed in testing we saw one picture of the ducts unconnected to the beam wing. These ducts pass either side of the engine to the rear bulkhead.  A clear view of the ducts can been passing from the rear wing to the chassis in this screen shot.

I assume they pass outside the fuel tank area and into the cockpit area, where they then pass along the roof of the footwell to emerge at the front bulkhead. This tortuous routing within the tight confines of the car probably explains why two ducts are used and not one larger duct.

With the nose cone removed the front bulkhead is visible, like other teams Mercedes fit a carbon fibre moulding to aid refitting the nose accurately and without damaging any parts during rushed pitstops. In Mercedes case the ‘cage’ like moulding mimics the shape of the cosmetic panel fitted atop of the structural element of the nose cone. This cosmetic panel was the dispensation teams were given to fair-in the 75mm nose step. In Mercedes case the part of the nose cone that does the impact absorption is the very rounded and pointed lower section, the upper section probably provides some degree of bracing for the structure, but is not the same thick sandwich construction of the lower nose section.

Hidden behind this carbon fibre cage on the front of the chassis are two ducts, of similar size to those passing through the engine bay (as seen arrowed  in this picture ). The ducts turn 90-degrees to face downwards. When the nosecone is fitted, these ducts connect with corresponding holes in the nose cone to pressurize the nose and this in turn feeds the airflow down the front wing pylons to the front wing. Underneath the front wing there is a pair of slots. When DRS is open the flow through the ducts blows through these slots and stall the front wing.

For rival teams to replicate this system, they will need to find space to package the ducts inside the footwell area. As we saw in 2010, teams can be very imaginative in creating way to package this sort of solution. But this will take time and may explain some team’s opposition to the legality of the system.

51 thoughts on “Mercedes DRS Duct: How it links to the front wing”