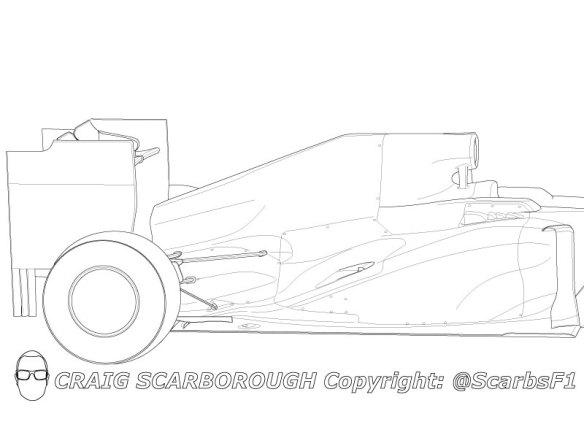 Having been slightly off the pace in the opening three races, Red Bull clearly do not have the RB8 working as they had expected. Pole position in Bahrain doesn’t prove their issues are over, but the car sports a revised sidepod set up this weekend and this has perhaps has unlocked the potential in the car. The new sidepods are a revision of the Version2 spec sidepod/exhaust set up. The Bahrain spec simplifies the sidepod, removing the complex crossover tunnel under the exhaust ramp.

At the cars launch the RB8 features a simple Version1 exhaust set up, aimed at being a benign solution to get the bulk of testing out of the way, without interference from complex exhaust issues. Then later in testing the focus could switch to the greater potential performance offered by the V2 set up. The V1 set up placed the exhaust in board and rearward, blowing under the top rear wishbone. The exhaust flux blew along the tail of the bodywork and under the beam wing. Despite suggestions at the time that this set up was a novel exhaust blown suspension set up; the solution was never intended for race use.

Then on Day11 of the 12 day preseason testing schedule, the V2 sidepod\exhaust appeared. A more complex solution than either the McLaren or Sauber set up, the sidepod aimed to both direct exhaust flow at the diffuser and route the sidepods undercut flow to the centre of the diffuser. To do this the sidepod had a more outboard and rearward exhaust position.

The exhaust blows down the tail of the sidepod, over a ramp made to try to attach the exhaust flow to the bodywork via a coanda effect to direct it in the correct gap between the rear tyre and diffuser. This is the same area the teams aimed their exhausts directly at last year. This area helps both seal the diffuser from flow blown laterally from the rear tyres and also the greater mass flow of the exhaust plume creates more flow through the diffuser, with both effects adding downforce. This solution follows the same path as the much applauded Sauber solution. Although the two systems were developed in parallel and RBR did not copy the Sauber after seeing it launch. The RB8 always was planned to run the V2 set up.

V2: a tunnel is created under the Exhaust ramp bodywork (yellow)

V2: Flow from the sidepod undercut passes through the tunnel (yellow)

To keep the airflow passing over the top and centre of the diffuser, teams direct the fast moving flow from the sidepods undercut to this area. In Red Bulls case, the path of this flow is obstructed by the exhaust ramp and plume. To overcome this Red Bull have simply created a tunnel for the air to pass under the exhaust ramp and remerge towards the centre of the diffuser. This solution looks like is major aim was to direct flow to the start motor hole, an area exploited by ductwork on the 2011 RB7. Having more airflow passing into the starter motor hole, makes the hole act like a blown slot, making the airflow better up and under the middle section of diffuser for more downforce. Creating a crossover effect is somewhat like McLarens bulged exhaust fairing, that allow both the exhaust to be directed down to the diffuser edge by the downwash flow over the sidepod, but also creates a channel beneath the exhaust bulge to allow the undercut flow to reach the centre of the diffuser.
So it seems Red Bulls V2 floor make the best of the Sauber Coanda solution and the McLaren undercut solution.

What are the issues?
However this tunnel is compromised by the post-2009 area rules. Sidepod bodywork 50mm above the floor (actually 100mm above the reference plane) must meet tangential and minimum radius regulations. This means Red Bulls tunnel is limited to slightly less than 50mm in height, with a sharp top edge.

It seems it’s this crossover tunnel on the V2 sidepod that is an issue with the car. Recent flowviz tests in free practice were focussed specifically on the tunnel, as well as tests with an array of aero sensors trailing the diffuser in Bahrain. Also an insider tells me that the Red Bulls starter motor might not be creating the accelerating airflow into the steep middle section of diffuser that was envisaged. Instead the starter hole works better when blocked off. Perhaps this crossover tunnel is not flowing correctly to the centre of the diffuser and altering the accuracy of the exhaust flow towards the tyre\diffuser intersection.
If the exhaust flow cannot reach the tyre\diffuser gap accurately or perhaps more importantly consistently, then the driver will have a car that sensitive to throttle position.
Red Bull have been alleged to have clever engine mappings, cutting down to four cylinders at larger throttle openings at lower revs. This could either have the effect of a softer power delivery for better traction, of greater exhaust flow for more downforce at lower revs. Red Bull and Renault may still be finding ways to gain performance from exhaust mappings and these mapping have been investigated the FIA and shown to be within the regulations.
With several issues around the way the exhaust affects the cars handling, Red Bull said in China that the V2 sidepod was the potentially better solution, but the V1 set up gave Vettel more confidence. Horner admitted that it was possible to get the performance of the V2 with the feel of the V1. At Bahrain it appears that this is what RBR have done.

V2.1: With no tunnel the exhaust flow can pass without interference to the diffuser

These issues may explain the Bahrain sidepod upgrade. This new sidepod set up appears to be a rework of the V2 sidepod, most of the shape remains the same and the exhaust appears to be in the same position. So it looks like the moulds were altered to close off the cross over tunnel create a V2.1 sidepod.
With the tunnel closed off the issues complicating the exhaust and starter motor hole flow have been cleared up. But there still remains an issue with how the sidepod undercut flow reaches the rest of the diffuser. Sauber appear to manage this, but there still may be some potential airflow performance that is lost with this set up. Although the overall effect of an exhaust aimed accurately at the tyre\diffuser gap may be a greater gain that that loss.
However with the tunnel gone there is a less complex route for the exhaust to reach the diffuser. With the exhaust flow better managed the intended exhaust effect will more consistent resulting in a better feel for the driver at different throttle positions and car attitudes. 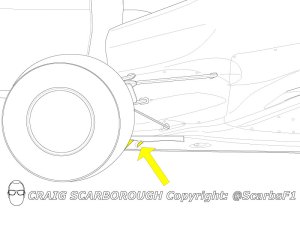 V2.1: Slots in the floor aid the effect in sealing the diffuser

It’s notable that Red Bull have also reintroduced the slots in the floor ahead of the rear tyres, these haven’t been seen for a couple of years, their function is to inject some higher energy airflow into the gap between the tyre and diffuse. This, like the exhaust blown diffuser, offsets the sidewash (known as ‘Squirt’) created by the rear tyres impinging into the diffuser. Again this will all result in greater rear downforce.

If this is the first solution for Red Bulls woes, then it will be interesting how the team develop from the V2.1 sidepod. Perhaps the tunnel will reappear in revised form or a McLaren style solution will be tried.