Sauber have proven to be one of the more progressive teams with aero development this year. The team’s have played with several different approaches to aero and exhaust positioning over the opening months of the year.
Now Sauber have produced their fourth sidepod iteration and surprisingly it is a McLaren style exhaust outlet. This goes away from the path they forged with the ramped downwash sidepod. Aiding the new exhaust position is a revised vane over the top of the sidepod.
The team also ran a revised front wing. I will cover this development in a separate post.

Sauber launched their car with a simple sidepod (above); this almost looked like a Red Bull RB5 set up, with the top exit exhaust aimed generally over the rear bodywork. This simple initial attempt was probably just for the launch pictures.

As soon after, the definitive Melbourne spec exhaust was tested. This sported a distinctive ramped section, which created a downwash that drove the top exit exiting exhaust flow downwards, then the ramped tail of the diffuser encouraged the flow to follow the sidepods line down towards the rear tyre\diffuser. This mix of downwash and coanda effect all but reproduced the EBD effect used in 2011. As the exhaust flow was directed along the bodywork, it appears to be more accurate way of directing exhaust flow towards the diffuser. However the effect lacks a path for the sidepods undercut airflow to pass through. Red Bulls Melbourne spec (V2.0) exhaust attempted to cure this with the cross over tunnel.
To aid the downwash flow over the sidepod Sauber added a horizontal vane over the front section of sidepod. This front 15cm of sidepod is free of the bodywork restrictions of the main sidepod volume. The vane points the airflow downwards, to drive greater flow over the exhaust exit. In isolation this vane actually creates lift, as is common with F1 aero this counter intuitive solution creates more global downforce because of its downstream effect, than the small loss in downforce its creates on its own.
In practice for subsequent races Sauber tried a third iteration of the exhaust, still with a top exit, but the exhaust faired-in and blow out through scalloped slot, presumably to better direct the airflow. Using similar interpretations of the exhaust\bodywork rules as McLaren exploited with their side exiting exhaust. This V3 set up wasn’t raced and will probably never race, with this fourth version now seen in testing.

The V4 sidepod discards the philosophy of the firth three completely, instead the sidepod is shorter and the coke bottle area forms a much tighter waist. Protruding from the flank of the sidepod the exhaust sits inside a small bulged fairing. This fairing mimics the McLaren with the open topped channel cut in to it, to allow the downwash to redirect the exhaust flow. The channel probably also provides a small degree of coanda effect in bending the exhaust flow downwards, but far less than with the earlier sidepod designs. 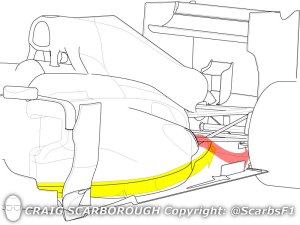 Exhaust flow exiting the duct now passes openly towards the tyre\diffuser intersection. With the coke bottle area now free of the ramped section, the undercut sidepod flow can pass towards the centre of the diffuser to use the energy in the flow to drive some downforce from the trailing edge gurney and starter motor slot.
With the change in sidepod profile and the exhaust exiting more sideways the through the top, the downwash vane has also been altered. Rather than a horizontal vane, the vanes curved around the frontal of the sidepod, to create the depression over the revised exhaust outlet position.