McLaren went into 2011 with an aggressive design strategy, this was a response to the poor initial form in 2010 and resulted in the dramatic “U” sidepods and a mysterious exhaust system. 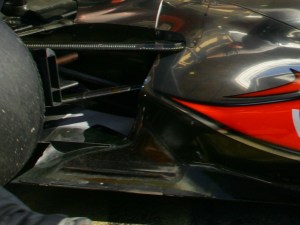 It was this exhaust system that stole most of the column inches in the F1 press and the fan forums during pre season testing. One particular column fed the interest around the exhaust and christened it the “Octopus”. The article suggested the exhaust was ducted to several exits and used high temperature Glass Ceramic Carbonfibre (GCC). It went on to explain the unreliability of the exhaust solution was due to the heat making it fail.
It was true McLaren’s first tests, even from the first private shakedown runs before the public testing had started, demonstrated a problem with the initial exhaust design. But this exhaust solution was not the “Octopus” as described; in fact McLaren Technical Director Paddy Lowe explained to me at the 2012 cars launch, that “it didn’t look anything like an Octopus”. Adding “The exhaust we had was a slot, we called it a fantail”, which was a simpler, albeit still innovative solution.

It was back in 2010 that Red Bull reintroduced the Exhaust Blown Diffuser (EBD), this created more downforce at the rear of the car especially at low speeds. Blowing the diffuser has several effects, firstly the flow through the diffuser is accelerated, this increases flow under the floor to lower the pressure and creates more downforce. Secondly the fast moving gasses flowing inline with the cars centerline, form a skirt under the diffuser sealing it from higher pressure air entering the diffuser at the sides and robbing downforce. This latter effect also offsets an aerodynamic effect called “tyre squirt” where the air spilling off the rear tyres passes into the diffuser, which costs downforce.
Other teams developed their version of the EBD through 2010, using the exhaust gasses to energise the Double Deck Diffuser (DDD). At the seasons end the FIA outlawed the double diffuser, robbing the cars of a significant amount of rear downforce. Going into 2011 without the DDD teams had to work the exhausts even harder to regain the downforce.
As explained back in 2011, there were several ways to do this. Now unable to blow into the diffuser through opening, there remained other areas that allowed exhaust gasses to enter the diffuser. Red Bull used the gap between the rear tyre and diffuser, Renault blew the exhausts under the leading edge of the floor, while McLaren had found another way.
The rules banning DDD’s called for a continuous surface up to 65cm from the cars centerline (Y650), while the floor could be as wide as 70cm (from the centreline) and the diffuser area as wide as 50cm (from the centreline). This left a small area outboard of Y650 limit to create an opening, usefully this was almost aligned with the gap in between the rear tyre and diffuser. Another rule was the banning on enclosed holes in the floors surface, thus anything appearing to be a hole through the floor had to be open when viewed from below and had to form part of the floors periphery. 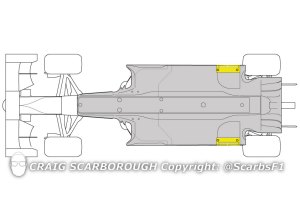 Still wanting to exploit the maximum downforce from the exhaust flow within the rules, McLaren were unable to simply open a hole in the floor and direct the exhaust tail pipe into it. So instead McLaren set about finding the loopholes in the new regulations to allow the exhaust to exit beneath the car. They realised the area outboard of the Y650 ban on continuous surfaces allowed some scope for an exhaust duct, “You’ve got to have the slot in the outboard 50mm” said Lowe.
However this being so far from the centre of the car it would be difficult to direct the large diameter exhaust tail pipe towards the diffusers edge. So the team narrowed the exhaust tail pipe from a ~100mm diameter pipe into a long narrow exit, forming the secondary pipe that emerges from the exhaust collector into a diverging fan shape. The resulting narrow exit was placed lengthwise outboard the Y650 exclusion zone. This allowed the exhaust to blow nearly vertically downwards to create the skirt effect.
Lowe explained to me “it blows along the outside edge of the floor ahead of the rear wheel”. As the resulting fan tail was so long, the skirt effect was even greater as the fan\skirt started some 60-70cm before the diffuser starts at the rear axle line. Blowing downwards the exhaust plume would be directed inboard slightly towards the diffusers edge by the general flow under the floor. At a stand still you could expect the reaction of the exhaust plume on the ground below would create quite a bit of lift. This is obviously offset by the far greater downforce created by the diffuser and at higher speed the plume would be blown off-vertical towards the cars centreline, further reducing the lift it induces. 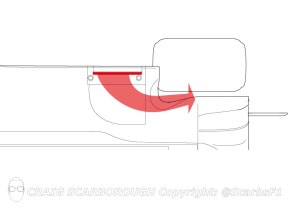 With the exhaust plume now directed into a legal area, the resulting slot in the floor needed to be made legal, in order to meet the “enclosed hole” and no “parts visible from below” wordings.
Lowe Explained to me “it has to be a periphery, so you’ve actually got to put a cut in it”. McLaren solved the need for the slot not to be considered an enclosed hole; they used the trick of creating a thin slot to connect it to the floors periphery. This workaround is not without is losses, Lowe warned “You’ve got to be careful you lose all the suction”.
Like wise for the slot to create vertical hole unobstructed by any parts, the top section of bodywork also received a slot. This ruling also prevented the exhausts exit blowing directly over the slot in the floor. Thus the exhaust is slash cut inline with the slot, in order to prevent the exhaust being seen through the slot from below. Therefore the exhaust doesn’t not blow perfectly vertical, but at a slight angle. Meeting these rules did cost the team some performance with the exhaust solution, but again the losses were easily netted by the overall blown diffuser effect.

It was a great engineering feat to manufacture these floor, exhaust and bodywork. The exhaust system has to be made from metal, typically Inconnel. But the surrounding bodywork is closely packaged to the exhaust and the slotted area around the exhaust. Although not publicised the use of Glass Ceramic Composites, such as the brand Pyrosic, are one of the few ways to make bodywork cope with this heat. Additionally teams use thin gauge titanium panels as another method to create bodywork around the exhausts. McLaren’s Fan Tail bodywork used both a titanium panel in the floor of the car and GCC type materials in the top bodywork covering the exhaust. To accommodate the heat resistant floor sections, the main floor moulding had large sections cut out, for the metal and GCC panels to be bonded in. With the outer section forming the blown slot made from Titanium.
In initial testing the reports suggested that the exhaust would break after a few laps, I doubt it was the exhaust itself that broke, as the technology to make robust Inconnel exhaust pipes has well been used in F1 for many years. Instead I’d propose the bodywork around the exhaust forming the floor and the upper fairing were unable to cope with the heat.

With limited preseason testing, McLaren felt it best not pursue the Fan Tail and dropped back to the back up solution, a more conventional rear exit exhaust. As Lowe explained, McLaren’s woes were far worse than they had expected when the back up exhaust also started to fail. Testing was over and the team had only completed limited running. Melbourne was coming up and McLaren needed to react to both the reliability problems and performance lost from the lack of Fan tail blowing the diffuser. By this stage Red Bulls EBD was already running, which blows over the outer edge of the diffuser, this was seen to be a good solution to the new exhaust rules. For Melbourne McLaren had built their own iteration of the outer exhaust blown diffuser, complete with Rapid Prototyped Titanium floor and diffuser. This solution was more successful and developed over the year to be the EBD set up everybody copied.

By the years end the fan tail solution was forgotten, as rules subsequently changed to prevent such over blowing of the floor.

There’s more comment from Paddy Lowe in this Interview with Peter Windsor on The Flying Lap.  The Fan Tail section starting at 30 minutes, where Paddy discusses the solution with the aid of my drawings.  he also discussed the F-Duct and McLaren’s 2012 development in the same interview.

The rear exit exhaust, was one of McLaren’s fall back solutions, unfortunately it was as unreliable as the Fan Tail