Over the past three races Mercedes have produced a near “B” spec car, with a new gearbox\rear suspension, new sidepods and a new nose. The cars specification was also altered to suit the low drag demands of Montreal with a shallower rear wing and modified front wing.

Having got the hot races of Malaysia and Bahrain out of the way and with several races experience of the 2012 Pirelli tyres, the team have been able to direct development towards a major update. This fundamentally consists of a new gearbox case, which is now made from carbon fibre. Bob Bell commented to ScarbsF1 that the gearbox is the source of most of the rear end changes “the box is a logical progression technically and allows us to save weight, facilitate tighter rear bodywork and revise the suspension geometry.”

An exclusive picture of the Carbon case is on Motorsportgp.pl, the last picture in the gallery (picture 18) shows the new casing.

As its lighter it, helps lower the Centre of Gravity at the rear of the car, by being able to add ballast lower down. The revised case also supports new rear suspension geometry to get more from the tyres. As Bell alluded to, the case is also part of an aero upgrade. The car has slimmer sidepods, starting from a narrower inlet and tighter bodywork wrapped around the rear end.

As gearboxes are changed in strict rotation, one driver got the new gearbox earlier, as confirmed by Mercedes “the carbon box was introduced on Michael’s car in Barcelona and with Nico in Monaco”. This was possible because Schumacher’s gearbox change in Bahrain. Although he used the spare old specification gearbox in Bahrain, the rules allow him to use a different gearbox at the next race, so he had the carbon case in Spain. 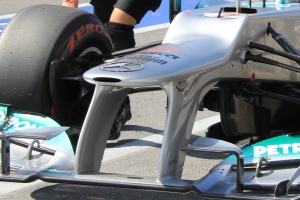 Seen in Mugello testing, the cars aero also sported an updated nose, this is a wider version of the normal nose. The tip and pylons are wider, presumably for a better route of the DDRS pipes into the front wing. This nose along with the revised Side Impact Protection Spars (SIPS) inside the narrower sidepods needed re-approval and hence had to be crash tested.

One last feature in Monaco was the small fin under the wing mirrors. These are a simpler version of the vortex generating fins seen on many cars this year, and send high energy airflow over the sidepods. 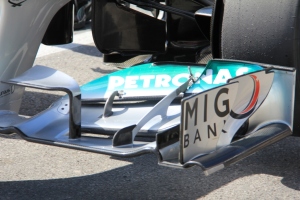 For Montreal the car needs more top speed and hence less drag, so the rear wing is trimmed to a shallower angle. This reduction in rear downforce needs to be matched at the front, to retain the cars balance. Mercedes did this by removing the cascade winglet on the front wing. A small fin remained where the cascade normally mounts. In detail you can see how the airflow moves across the wing. The slot gap separators and flap adjuster all form vanes to direct the flow over the top surface of wing. We often see sparks come up from the Mercedes Front wing, these come from the lower outer edge of the wing tip and are made from Titanium. These inserts to improve the wings durability from frequent grounding on the track.

Montreal DRS failure
There was an unusual failure of the DRS system on Schumacher’s car in the race in Canada. The DRS failed in the open position. The Race Engineer made a radio call to warn the driver, but the loss of downforce was obvious as he went on at the next corner. In the pits the mechanics failed to be able to return the flap to the closed position. Rules demand any failure in the DRS mechanism, should see the flap return to its closed position. Despite strenuous efforts in the pits this wasn’t possible and the car had to be retired. It transpires a failed hydraulic line prevented the pressure in the hydraulic actuator from closing, this could either have been from a failure in the high pressure feed or the lower pressure drain pipes. Either way, pressure was not released from the actuator and the flap therefore could not close. We could see mechanics reach into the open rear section of engine cover to get the pipework, but it wasn’t possible for them to isolate the lines.
Uniquely Mercedes place their DRS mechanism in the rear wing endplates; other teams have a single actuator in a small pod above the wing. From the wings inability to close at either end, it shows there is a common hydraulic feed to both actuators and it’s this common pipework that failed.
This problem wasn’t related to the unique Mercedes D-DRS system, as there were some suggestions during the race that the D-DRS may have been a factor, perhaps by debris being caught in the open duct preventing the wing closing. This specific type of failure, where the hydraulic actuator cannot close, appears to be possible in any teams DRS.

“In Canada the problem we had with Michael was a hydraulic coupling. We have couplings which are quick release because we need to make changes quickly at the back of the car. They have a locking system and the locking system appears to have fatigued allowing the coupling to come undone. It’s not a problem we’ve obviously seen before, and we’re going to change the design to make sure there’s less likelihood of happening, but it’s a well proven part and very frustrating something like caused a problem.”

With this information, its possible the scenario was the system was pressurised to open the DRS when the QD coupling came apart.  As they are dry break couplings, they did not allow the pressure to release from the DRS actuator, thus keeping it in an open position.