At the European GP in Valencia we saw the unusual circumstance of two ‘leading’ cars both retire within a few laps of each with a related fault. It was confirmed by Renault that there were alternator failures on the Renault Engines of Vettel’s Red Bull and Grosjean’s Lotus. Typically the alternator in a Modern F1 car is unseen and causes almost no issues, so this is an opportunity to look at this component and the failures in Valencia.

What is an Alternator?

Just as with Road cars F1 cars need electricity to power the onboard systems. F1 cars with their masses of electronics and fuel pumps consume a great deal of electricity. Again, as with Road cars F1 cars use an alternator to convert the mechanical movement of the engine to create electricity. An alternator is a simple generator which uses rotating copper windings and stationary magnets to generate AC power. This is fed through a voltage regulator to provide the 12v supply to the cars systems and its small battery. As the engine is always at high Revs the alternator provides more than enough power for the cars systems. Therefore, onboard battery is tiny, akin to a laptop battery and simply there to provide some buffer in the electricity supply to the cars systems. So when the alternator fails the battery will soon lose charge and be unable to support the cars systems. In a road car when the alternator fails a red warning light comes on and shortly after the car will break down. In an f1 car the alternators function is constantly monitored, the power output and the unit’s temperature are visible via telemetry by the team in the pits. In the case of the Valencia failures, the teams already knew before the Safety car the units were overheating and would fail. 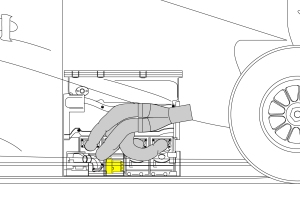 The Alternator (highlighted) sits low down on the engine

Open the bonnet on your road car and look at the front of the engine, one feature will be a series of belts driving various subsystems. One of these is the alternator, often a metal bodied casing, with copper windings visible through the cooling holes. A road car alternator is heavy at over 5Kg and over 15cm diameter and 20cm long.
On the F1 engine we can see the alternator is tiny and mounts low down on the left-hand side of the engine. Having it low down helps reduce the cars Centre of Gravity. It’s also shaft driven, via a spur gear that’s driven off the crankshaft. The water pump and hydraulic pump are both driven along this shafts axis, the alternator sitting in-between them. Obviously shaft drive is more reliable than a belt, especially considering the high RPM the engine runs at. Data from Marelli shows that F1 alternators run can over 19k RPM, so presumably the shaft is driven at engine speed.
The alternator itself weight just 750g, is some 5cm in diameter and just 7cm long. It’s a mix of common and exotic materials, with an aluminium casing and rare earth magnets inside. More exotic materials for the case and rotary components are restricted with the engine regulations. The alternator is counted as part of the engines 95kg weight, but it can be changed for an identical part without penalty.
As with any electric system, an alternator’s enemies are; dirt, moisture, heat and vibration. Its low position keeps it clear of most debris and rain, while years of development have made the device robust enough for the vibration from running on track. So, heat is clearly a major problem, Marelli quote maximum running temperatures for an alternator as 200-degrees C for the copper winding and 150-degrees for the bearings. As you will see from the illustration, the alternator is in close proximity to the radiant heat of the exhausts and the heat from the engine block itself and heat convecting upwards from the track surface. So teams protect the alternator and its electrical loom with heat shielding and provide a small degree of cooling airflow through the heat shielding to conduct heat away from the device.
Some engine manufacturers water cool their Alternator. Having a water jacket inside the Alternator casing which gets a feed of coolant from the engines main cooling circuit. From what I’ve been told two of the four current manufacturers use water cooling, where as the Renault uses only air-cooling. In some engineers eyes water is sufficient for an alternator that is running without any problems. But should the alternator or the regulator that it feeds should have a problem thermal runway is an issue. Possibly water cooling provides some margin for small problems, but this will come at the cost of a little extra heat being passed into the water cooling circuit and as a result require marginally larger radiators.

Reading through this background on alternators many technical readers may wonder why F1 uses these systems at all, when KERS provides almost the same solution. In other categories of Motorsport, the alternator is replaced with the KERS hardware. Indeed in Renault’s own feeder series Formula Renault, KERS along with Super Capacitors fulfil the alternators function. The way the F1 rules are worded, the two different energy systems of Alternator and KERS have to be separate. This goes back to the days before KERS when energy Recovery was a solution banned from the rules. When KERS was brought in as a optional system in 2009, the rules separated the two solutions. It would certainly make sense for the two systems to merge to keep F1 in step with road car and other Motorsport categories.

Renault’s Failures
To RenaultSport’s credit they have been transparent in the faults and Rob White the RenaultSport F1 Deputy Managing Director, provided a detailed explanation of the problem.
Firstly, a point I need to stress, is that the failed alternator is a Renault part. I have quoted Marelli data in the post so far, as this is about the only detailed information on F1 alternators in the public domain. But this doesn’t link the failures to the Italian supplier in anyway.
As White explains “it is a Renault part. We use various suppliers for the sub-internals but we build the alternators so we are responsible for the integrity of the part.” White continues and confirms the cause of the failures “It appears that both alternators overheated. We’ve checked over the parts thoroughly now and it seems that there were no obvious reasons for the failure, so we are conducting further tests on the dyno at Viry to replicate conditions and double checking the findings”.
As the failure on Vettel’s Red Bull occurred immediately after the safety car came in, it was a common assumption that the Safety car caused the failure some how. “The slower speeds prolonged its life expectancy slightly” was the surprise response from White, as the slow running meant the alternator was running at a reduced load and allowed it to cool.
White goes on to explain the failure was already a known problem for Red Bull in the race “We had evidence that the alternator on Sebastian’s car was showing signs of overheating before the safety car period. Of course, when Sebastian went back up to racing speed the problem stepped up again and the result is now well known”.
In contrast to the forewarning of the Red Bull failure, the Lotus problem came on more quickly “With Romain’s, the problem occurred very suddenly some laps after the safety car had been withdrawn.”
This years Renault alternator is a slightly revised specification and the units on the two cars in Valencia were effectively ‘new’, as both drivers had a fresh engine installed after Friday. This perhaps points to an explanation for these specific failures “they were brand new parts, which points to the fact that this may be an issue with a particular batch of alternators”. While I say ‘new’ alternators White explains the process to prepare parts for their introduction to a race engine, “both had been shaken down on the dynos at Viry for approx 400km and completed FP3 and qualifying without any issues and then failed suddenly in the race. Both had completed less than 1,000km.”
All engine suppliers have a series of small issue with engine development through the season. Most of these go unannounced and are never heard of until they lead to a bigger technical problem. This seems to be the case with the Renault Alternator. White lists the issues experienced with the part so far this year, “We had one issue with Red Bull over winter testing but this was because we were pushing the car and the engine to the absolute limit to find out how far we could go. Once we had signs of issues, we went more cautious with the settings”.
He continues “We did have one issue with Vitaly Petrov’s car in Monaco but when we investigated the problem, we found that the alternator in question had completed over 4,000km and was due to be serviced very shortly. As a result we decreased the amount of time between alternator services to a much lower figure. We felt that this was a sufficient measure”.
With two high profile failures and each which could have cost a race victory, RenaultSport, have to act to resolve the issue on behalf of their customers. With the British GP just a week away and within the stringent engine regulations, their options are limited. With it being a clear reliability issue and potentially restricted to batch of Alternators, White proposes several options “The first is to use another batch of alternators for Silverstone across all our clients, or a slightly modified design.” The next option White suggests is “looking at returning to an older specification of alternator from 2011.”
As well as the physical alternator, there are other ways the teams manage the problem “potentially introduce some mechanical and cooling solutions, or changing a few settings on acceleration maps so the running is less severe.”
White concludes “All of these will be in evaluated between now and Silverstone, plus we will also look at everything after Friday running and see what additional measures we may need to take.”
For Renault with their air cooled alternator, the switch to water cooling is not likely to be a short term option. Its possible that in the longer term, despite the engine freeze rules, dispensation could be given for the change on reliability grounds. But if this failure was batch issue as described, the switch would not be necessary.

It’s been a useful insight to understand the level of detail work the engine manufacturers have to go through, to develop and support their engines. Even a simple component such as the alternator clearly soaks up a lot time at the Factories, just to ensure such an issue should not arise.