Red Bull have raced two major iterations of sidepod and exhaust this season, at Valencia they introduced their third. This iteration brought the re-introduction of the bridge\tunnel concept first used with their V2 sidepod. These sidepods not only sport a single tunnel, but the inlet is split to feed two different flows inside the bodywork. Initially mistaken as a double floor or double diffuser, This V3 sidepod sees a return to the duct blown starter motor hole raced in 2011.

Blown effects
Last year Red Bull raced a small duct system (Blog post) to blow the diffuser, taking high pressure air above the floor and feeding through a duct to blow the starter motor hole (SMH). Blowing the hole is not for any starter motor purpose, but this is the only opening allowed in the diffuser area, and despite it being limited to a specific cross sectional area, teams exploit this for aerodynamic benefit. The middle section of diffuser where the SMH lies, is the steepest and thus the most difficult to keep flow attached to. Blowing the SMH acts like an extra slot in a wing, it adds energy to the flow and keeps the flow attached to prevent separation\stalling. 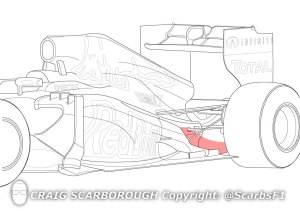 As we saw with the V2 sidepod the bridge\tunnel solution works to direct the exhaust down a ramped section of sidepod to be aimed at the diffusers foot plate, between the rears tyre and diffuser wall. Blowing this area both speeds up flow through the diffuser and helps seal the diffuser from high pressure air outside the diffuser. These effects add downforce and very little drag. However, this set up leaves the problem of the flow passing low around the sidepods being unable to pass over the diffuser. So Red Bull opened up a tunnel to allow the exhaust flow and sidepod flow to crossover.
The problem with this set up appeared to the low (50mm) tunnel did not direct the airflow as it should and flow entering the tunnel spilled back out at speed. As evidenced by flow-viz trails reversing out of the tunnel, when the team completed aero tests in Friday practice.
In the first iteration of the V2 sidepod, the tunnel exited ahead of the diffuser, which allowed flow to pass into the open boat tail of the diffuser and into the SMH. Later versions of the V2 closed over this tunnel exit and boat tail area and ducted flow internally instead. It’s this ducted concept that’s returned with the V3 sidepod 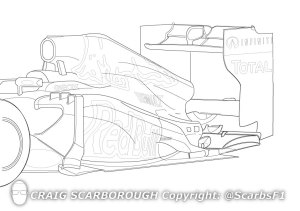 This new sidepod appears to use very similar general shaping and exhaust position, to the previous V2 set up. What has changed is the tunnel arrangement and the internal ducting. The tunnel inlet is now much larger, the inlet is formed of two openings, the forward opening is more rounded than previously to encourage air to pass into the duct, and this meets both the 50mm height restriction and the R75mm curvature rule for sidepods. Then another opening is created behind that, which has a much sharper edged perimeter and sits in the tail of the ramped sidepod section.
The area around the diffuser and the boat tail area is no longer open and instead is covered over with a continuation of the ramped sidepod bodywork. 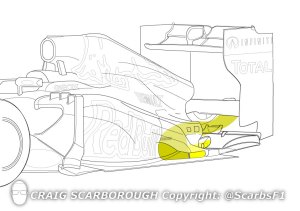 If we remove the rear wheel and some bodywork the; diffuser, boat tail and SMH are visible. The tunnel ducts aim to blow these areas. The larger radiussed front duct blows through a cooling exit alongside the gearbox. This flow doesn’t appear to directly ducted, so the flow simply joins the internal flow through the sidepod to exit in the same outlet.
The smaller rear duct is ducted and specifically to a chamber formed in the boat tail around the SMH.

With the floor removed we can see the duct arrangement

With the floor removed from the car the ductwork is evident. The tunnel inlets are moulded as part of the floor. The larger duct is short and ends with an open outlet inside the sidepod. The smaller duct forms a square section duct that runs over the floor, into the stepped under body and the ducts join in the boat tail. The actual starter motor hole is a tubular carbon pipe passing through this area. The chamber formed by the pipes joining the diffuser, allows the air to pass out through the wide rectangular ‘aerodynamic’ SMH exit. 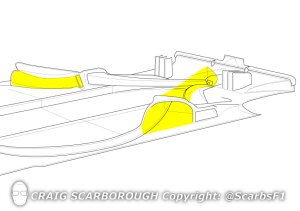 The larger forward ducts simply vent either side of the gearbox

With this set up the relatively high energy air passing low around the sidepod enters these ducts, to have an aerodynamic benefit aimed at specific areas, rather than blowing in the general vicinity. This should be more consistent in producing downforce; inconsistency in producing downforce was the problem with the early iteration of the RB8.

Other changes on the RB8 for Valencia were revised vanes over the diffuser. These were present on the launch car, but have multiplied and grown over the season, now we see three near identical large vanes, to turn the flow around the coke bottle area between the rear wheels and gearbox. The diffuser still retains the trailing edge flap introduced last year.

At the front of the sidepod, Red Bull have followed the 2012 trend for vortex generating vanes on the shoulder of the sidepod.
These help direct flow over the sidepod, either to reduce lift from the downswept sidepod tops and\or to direct higher pressure flow over the exhaust outlet to help it bend down towards the floor.

Lastly the RB8 had a revised rear suspension, this appear to be formed of a new top wishbone and upright. The upper wishbone being shorter, necessitating a longer extension at the top of the upright, then the upright also repositions the brake calliper into a 6 o’clock position, having been rotated slight towards the rear on the pre-Valencia spec. The shorter upper arm will increase camber change with suspension movement, some thing likely to generate more heat in the tyre. With other teams also making suspension alterations it appears the enigmatic 2012 Pirelli tyres are starting to be understood.

By doing this Red Bull have gained the advantage of the accurate aiming of exhaust flow over the ramped bodywork section and have kept the aero benefits of the cross flow around the sidepod. Having ducts will always induce aerodynamic losses, but the benefit of the cross flow and blown SMH will most likely outweigh these internal losses. The question remains if this change is the secret to Red Bulls pace in Valencia. Certainly the changes are a technical improvement; I do not see these as a major step in comparison to other team’s solutions. The way tyres are affecting races at the moment, we would need to see Red Bull perform consistently at the level of Valencia to confirm if this sidepod package is the answer.