I’ll compress this months work into one post for simplicity. For updates on F1 technology have a look at the following outlets: Automoto365.com and Motorsport Magazine.

This is my major outlet, with my images and writing on race-by-race developments

I’ll compress this months work into one post for simplicity. For updates on F1 technology have a look at the following outlets: Automoto365.com, Motorsport Magazine and Race Engine Technology magazine.

I’ve illustrated this article on this years must have developments: F-ducts, Exhaust Blown Diffusers and deflecting splitters.

What lies inside a contemporary Formula One engine? Toyota have given Race Engine Technology full access to their current RXV-08 F1 engine. This issue contains the most detailed technical article ever published on a current F1 engine. A 16 page article covering all aspects of the Toyota Formula One engine in a level of detail you will have never experienced before. RET have been given unprecedented access to the engine with the full co-operation of the entire technical team.

This months ‘Race Engine Technology’ magazine has some interesting stuff for F1 Tech followers. There’s an interview with Mario Ilien, who explains the work he did with Mercedes-Ilmor including; Hydraulic KERS, a rotary valved V10 (+20k RPM & 78Kg) and of course Berylium for Pistons & Liners.
In the Report from the F1 British GP, the Editor interviews Adrian Newey, Also Costa, Sam Michael and James Allison. Covering several topics; the effect of engine power\drivability\consumption, as well as gearbox design influence on aero, with Newey commenting the Pull Rod was a carry over from 09 & not a requisite for his RB6 design. While Ferrari confirmed their engine\gearbox assembly is inclined at over 3-degrees, the first time I’ve seen a reliable quote confirming this fact. It was added that Sauber take this set up for their C29, while Toro Rosso have their own gearbox so have a horizontal drivetrain.
Lastly is a small section on how Sauber pioneered current gearbox design with a longitudinal gearbox, with the gears ahead of the final drive and contained within an aluminum case. It surprised me that Harvey Postlethwaite was involved in this, is there anything that man didn’t do in F1?

Not generally available in the shops and not cheap, but well worth a one-off purchase or subscription.

Intro: THE EDITOR
Racing powertrain technology is on the verge of a revolution; Ian Bamsey says this issue gives some hints as to what to look for

Upfront: MARIO ILLIEN ON FUTURE TECHNOLOGY
Ian Bamsey talks to Mario Illien about his pioneering work in Formula One during the V10 era and the future of race technology

Focus: THE GEARBOX
John Coxon explains key points in designing and building a motorsports transmission – from the gear teeth to choice of differential

To view a sample article from this issue please click here

My Technical review is now online at Automoto365.com.  With the latest updates across the grid.

My Technical review is now Racecar Engineering Magazines Website. With News on the Ferrari, Renault and Mercedes blown diffusers, Red Bulls and williams Vaned double diffusers, Everyones f-ducts and all the new bits on the cars including Ferrari, McLaren, Renault and Williams.

My technical review is now online at automoto365.com http://bit.ly/9yQcHZ. Detail of the major Williams upgrade, plus Renault, Sauber and Lotus updates.

I don’t often re-print press releases in their entirety.  But this competition from Renault & Altran represents a real opportunitiy for a talented Graduate to get into F1.  If like me you’re into the technical side of F1 and (unlike me) you’re a recent graduate, then I would suggest you have a good read of this and put in a entry…..

The Renault F1 Team and Altran today launched the seventh season of a unique competition with a proven track record of bringing young engineering talent into F1: the Altran Engineering Academy.

It’s an age-old conundrum for talented young engineers aiming for a career at the pinnacle of motorsport: “How can I get a job in Formula 1?” Since 2004, the Renault F1 Team and Altran have been providing the answer through the Altran Engineering Academy, a competition that identifies and rewards technical excellence at graduate level. The prize takes the form of a six-month internship in the Research and Development department of the Renault F1 Team – a genuine opportunity to launch and pursue a career at the highest level of world motorsport. For 2010, the Renault F1 Team will offer not one but two internships to the winning finalists. The first will be at the team’s chassis development facility in Enstone, UK; the second at its engine development centre in Viry-Châtillon, France. In both cases, the winning student will join the team for a six-month placement that could open the door to a long career in F1. Included in the package is a six-month salary of €6,500, a Renault pool vehicle with a business fuel card and accommodation in a one-bedroom flat. What’s more, every finalist will receive a special engraved edition of the recently launched Pilot Watch from Renault F1 Team partner TW Steel to commemorate their achievement.

In order to enter the competition, applicants must be final-year students or recent graduates of a university or prestigious school, who have specialised in science or technology. Entry to the competition takes the form of a 500-word submission describing a technological innovation in one of eight areas related to F1 development: aerodynamics, control systems and electronics, design and analysis, performance engineering, power train energy recovery, materials research and development, transducers and test technology or vehicle dynamics. The focus of the presentation is on how this innovation can improve car performance, and how the student plans to conduct the project over the six-month internship. The entry period lasts from March 22 to May 28 2010, with the finalists to be announced on June 14. The 2010 Altran Academy will feature representatives from 18 countries that reflect Altran’s positioning and international reach. They are organised into 11 global regions, and each region will provide one finalist in the competition. These 11 finalists will present their projects to an expert jury chaired by Robin Tuluie, Head of R&D at the Renault F1 Team, on July 13 2010 at the team’s Enstone headquarters. The winning finalists will begin their placements in September 2010.

The Altran Engineering Academy has a proven track record as the launching pad for a career in F1. 2004 winner Mark Caldwell continues to work with the team as a CAD engineer, while other winners and finalists have worked with the team in trackside and factory roles, and continue to do so. The 2009 Academy winner, Helen Makey, triumphed with a presentation on enhancing energy efficiency through moveable aerodynamics. She was the competition’s first female winner, and recently had her contract extended to continue working in the team’s performance department.

For more information on the 2010 Altran Academy, and for complete details of how to enter the competition, visit the official website at: http://www.altran-academy.com.

How do we respond to changes in engine regulations? How do we improve the chassis’ aerodynamic performance? High-level expertise is required in so many different fields. Altran has been supporting the Renault F1 Team since 2002, providing talented engineers in a variety of specialities, including computation, information technology, electronics, logistics, quality control and simulation. They contribute their skills to chassis in Enstone, UK, and to engines in Viry-Châtillon, near Paris. The Altran experts are driven not only by the human and sporting adventure, but by the technological challenge as well.

Altran is the European leader in innovation consulting and high technology. The Group’s 17,149 employees, operating worldwide, cover the entire range of engineering specialties, including electronics, information technology, quality and organization. Altran offers its client’s ongoing support throughout the innovation cycle, from technology watch, applied basic research and management consulting to industrial systems engineering and information systems. The Group provides services to most industries, including the automotive, aeronautics, space and telecommunications sectors. Founded in 1982, Altran operates in 20 priority countries. In 2009, it generated a turnover of €1,403.7 million.

In this weekends race Petrov retired with e a suspension problem, it transpires the ride height adjusting shim fell out between the carbon pushrod and the titanium end fitting,  Here James Allison explains “On lap 11, Vitaly reported that the car wasn’t behaving normally and he began losing a lot of lap time to Barrichello. We called him into the pits for a precautionary check and found a problem with   the   right-front   suspension   pushrod   that   forced   us   to   retire   the   car.   Upon   further investigation, it transpired that the pushrod had been touching on the chassis when running on very heavy fuel at the start of the race. This damaged the bolt that attaches the pushrod to the car, and meant we lost a shim from the suspension, causing the DNF. Robert preferred a slightly different ride height and was fortunate not to encounter the same problem. We are, of course, disappointed  that  we  did  not  discover this  problem  during  pre-season  testing.  The  parts  in question will be modified for the next race to ensure that it cannot recur.” 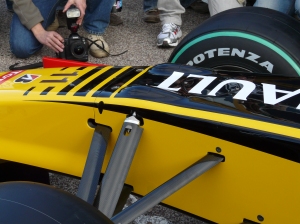 Pushrods: these are normally used to adjust ride height, adding shims between the carbon pushrod and the metal top section

Although some aero devices were deemed legal in Bahrain, the FIA scrutineers did take a different view of some teams starter holes.  This hole is allowed with in the rule to be in the diffuser in order to alow the starter mechanism to be inserted.  Normally this is a simple round hole, but some teams have expanded the hole into a much wider ellipse shape.  This effectively makes the starter hole an extra slot to alow the diffuser to be steeper and create more downforce.  The Scrutineers have asked for these designs to be changed before the Australian GP.

A lucky visitor to the Bahrain GP snapped this picture of the new Renault front wing, as seen briefly in Barcelona testing. With its wide curvy cascades and uprightless endplates, this is Renaults most contemporary wing since the new aero regulations came in.

Scarbsf1's Blog
Create a free website or blog at WordPress.com.