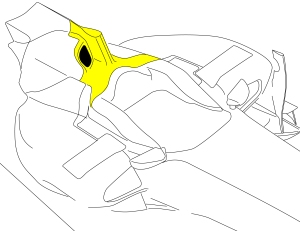 Last year Mercedes GP surprised many with their blade style roll hoop. Rather than the rounded hoop with the engine air inlet snorkel formed in the centre, the structure was a single thin blade and the inlet split into two either side of the blade. There are several benefits to such a solution, the primary one being better airflow to the rear wing, but also weight and inlet tract length are likely secondary benefits.

Although meeting the various load and impact tests, many thought the set up was marginal on safety, primarily thought the narrow structure being likely to dig into soft surfaces such as gravel traps, reducing the effective height of the structure, with obvious consequences for the drivers head. When the new rules for 2011 were introduced, I immediately thought the regulation 15.2.4 intended to ban these structures, but the wording does not go as far as that. What the rule requires is that there is a minimum cross section for the structure. It transpires that the rules intent was not to outright ban these blades, but to ensure they had a reasonable cross section, to allay fears of a ‘digging in’ problem.

15.2.4 “The principal roll structure must have a minimum enclosed structural cross section of 10000mm², in vertical projection, across a horizontal plane 50mm below its highest point. The area thus established must not exceed 200mm in length or width and may not be less than 10000mm2 below this point.”

The rules mean when looking from above (vertical projection) a horizontal projection 50mm below the top of roll hoop must have a cross sectional area of 10000mm2. Which for a rectangular cross section, the blade would to be a minimum of 50mm wide, which isn’t too difficult to achieve. The effect of this rule is that the long very thin blade of the Mercedes is outlawed, but shorter and wider structures are still allowed. 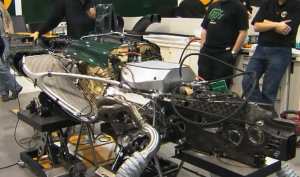 Roll hoops have a series of load and impact tests to ensure they are strong enough to survive an accident. Historically a roll hoop has been a metal tubular fabrication, bolted\riveted to the top of the fuel tank area of the tub. As carbon fibre became the choice for monocoques teams started to simplify the roll hoops, making a point or blade structures moulded into the top of the tank. Gordon Murray’s BT53 is the first example I can recall. Over subsequent years, Arrows and Benetton have tried pointed hoops, but since the advent of normally aspirated engines the roll structure has also formed the inlet snorkel for the engine, making blades less desirable. Rules initially mandated a maximum cross section to prevent huge inlets seen in the seventies. These rules appear to have been dropped from the regulations and there have been few regulatory requirements for size and shape of the structure. Aside from the demand for a slot to pass a sling through, should the car need to be craned away. As Monocoques are now homologated, the structural shape of the roll hoop cannot be altered during the season. Mercedes achieved this last year, by homologating the blade and later adding non structural bodywork to form the inlet snorkel. This add-on section being later removed to expose the blade. The blade used to be visible inside the inlet snorkel, even at its launch. A point to note is that although the roll protection has to absorb massive loads to pass the crash tests, it is not in itself an initial part of the monocoque. The carbon fibre tub is made up of several major parts, the top and bottom of the main shape, bulkheads and cockpit surround. But the roll structure is a separate bonded on part. Laid up separately and attached at the later part of the monocoques completion.

This year Both Lotus and Force India have adopted blade style roll over protection, both adopting similar layouts albeit different structural solutions. Mike Gascoyne was clear that the benefit on aero was marginal, but he insisted the prime benefit is also CofG height. Lotus have engineered their structure from composites, this in itself is quite unique, as even conventional roll hoops are made of metal to create the slim undercut shapes to meet the impact\load tests. Albeit they are subsequently wrapped in carbon fibre, acting as both streamlining and structural reinforcement. As the blade shape is simpler, Lotus have been able to make the protection from carbon, this saving a weight and significantly removing weight from about the highest point on the car. Force India meanwhile went a similar route but their structure is a metal part, clad with carbon, although the weight comparison to the lotus is impossible, it would be fair to assume it is slightly heavier.

As Mercedes have moved away from this solution, it will remain to be seen if the blade will be a more permanent solution in F1 or just a passing fad.