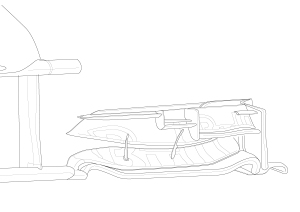 At this late stage in the season it seems Red Bull are the main team bringing upgrades, in recent races only Lotus, Virgin and Renault have notable developments. Clearly the imagination of Adrian Newey and Peter Promodrou along with the Aero Dept in Milton Keynes are still bringing new ideas to the table.
Although some elements have been seen tested at earlier race weekends, this is the first proper appearance of the new assembly. The wing now features a twisted main plane section and a revised cascade. 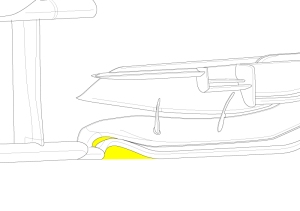 The main plane is no longer near horizontal meeting the FIA specification centre section of wing. Instead the wing curls up and intersects the central span at a near 90-degrees. I suspect this shape is to create a vortex along the Y250 axis, which a key area for creating the correct airflow conditions ahead of the leading edge of the floor. With the aim of creating more downforce from the floor and diffuser. 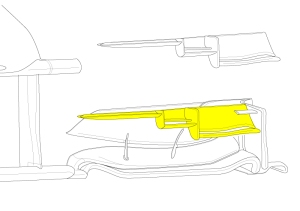 For the streets of Singapore, the team need a high downforce set up, thus the cascade which gained the McLaren style “r” vane in Monza (https://scarbsf1.wordpress.com/2011/09/10/red-bulls-monza-front-wing/ ), has now been extended with a large downforce producing section. Unlike the kink in the main plane, the inner end of this cascade has an elliptical section which aim to reduce vortices created at the wing tip, sending a cleaner wake downstream.