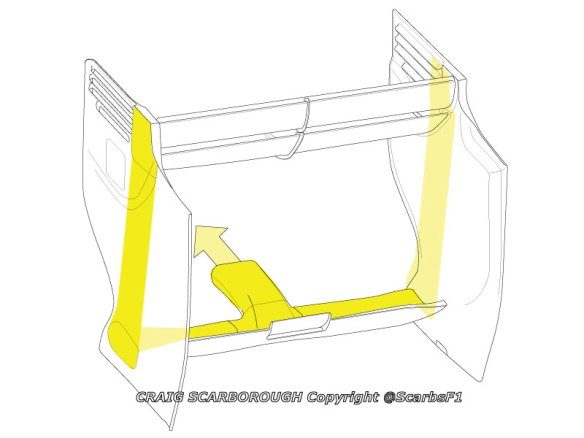 Update on how it links to the Front wing

Something often said of banned developments in F1, is that once understood no solution can be unlearnt. So while the FIA fights to ban technologies that they feel aren’t suited to F1, the teams will always try to apply that solution in a different way.
McLaren understood how to stall a wing by blowing a slot perpendicular the wings surface. This knowledge lead to the F-duct in 2010, as you will recall the FIA moved to ban slots in the rear wing and direct driver interaction with the cars aero. But the knowledge of blown slots to stall wings has remained and it’s been Mercedes who have been busy trying to apply it in other ways. This culminated with the tests of an F-Duct front wing late last year. Rumours continue to fly about the teams use of the F-Duct front wing (FDFW) in 2012. I understand the 2012 Mercedes AMG W03 does have an F-Duct front wing and this is operated by the rear wings DRS. Based on information I have from the sources around the team, and from looking at the cars performance and construction mean I can speculate how and why Mercedes might be using the FDFW.

As detailed in two articles last year, Mercedes are believed to have run blown slots under the front wing to stall the wing at higher speeds. Three reasons came up as to why this would be used; reducing drag, managing wing ride height and managing the cars aero balance. With nothing official being said by Mercedes, we were left unsure as to exactly why a passive FDFW would benefit the car.
https://scarbsf1.wordpress.com/2011/10/21/mercedes-f-duct-front-wing/

Some observations from the Mercedes team last year might aid us in putting a picture together of how the 2012 solution might benefit. Mercedes were the first team to really exploit more of the open DRS effect and use a short chord flap. The open DRS boosted Mercedes top speed and could be used through the lap in qualifying. Despite this benefit the teams did struggle in qualifying, their race performances latterly became better than qualifying suggested. It was clear for Michael Schumacher at Least, that the cars handling wasn’t ideal and the team sought to resolve the cars nervousness.
Bearing these points in mind, the potential benefits of a FDFW become more apparent. Mercedes need more qualifying pace; they can exploit their DRS more frequently during qualifying, but in higher speed turns the cars lacks the balance for the drivers to fully commit through the turn.
If they can cure these issues, then they will further up in qualifying and able to take the fight to the leading teams. I now believe the FDFW works to manage the cars balance in high speed turns when the DRS is activated. As DRS reduces both rear drag and downforce, the car becomes unbalanced in downforce front-to-rear. In other words pointy or oversteering. Which in high speed turns in qualifying is hard to handle. At higher speeds even with DRS reducing rear wing downforce, the car has enough downforce to make it around corner, the problem is how to make the car more balanced front-to-rear when DRS is activated.
The FDFW we saw last year appeared to be passive, this uses nothing other than airspeed to trigger the slot to blow enough to stall the front wing. If matched to the speed DRS would be used at (in qualifying), the passive FDFW would help balance the car, by reducing front downforce to match that of the rear. However the front wing would always stall at these speeds, whether DRS was in use or not, so outside of qualifying the wing would stall and the car would understeer. With Parc Fermé rules in force, the team cannot change the FDFW between qualifying and the race.
Another issue with the passive FDFW, is that under braking as air speed reduced, the wing would need time to start working again. But this early phase of braking is just when the driver needs the most downforce. What the FDFW ideally needs is a method to link its activation to that of DRS, in other words an active F-duct.
As we’ve already mentioned, driver activation is not allowed, as are any other moving parts to directly alter the airflow. This brings up the Designers favourite interpretation in the rule book, primary and secondary purpose. Any part on the car can be for a primary purpose; sometimes any secondary purpose is banned or restricted. However in most cases the rules are vague and Designers are free to find secondary uses for a solution on the car. Examples of this are the cooling fans on the Brabham Fan car, the engine blowing off throttle for blown diffusers or brake torque altering ride height on the Lotus Reactive Ride Height system. In each case the first element was legal as its primary purpose was as stated, but a secondary purpose was able to be exploited.

The DRS rules are quite clear that the flap must not be shaped to allow other aerodynamic benefits. In fact this wording affects only a portion of the flap and additionally the endplate is excluded from this wording. If the team could find a way to blow into the front wing a duct when DRS is activated, then the FDFW could work synchronously with the DRS. 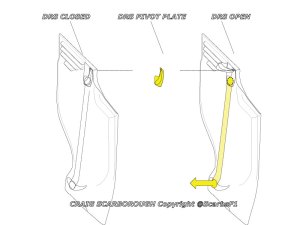 The hingeplate the flap mounts to, closes a hole when DRS is closed. When DRS is open the duct is revealed and the F-duct stalls the front wing

I believe Mercedes have found a way, by creating a duct through the endplate. When DRS is closed, the flap and the plate it attaches to is in a nearly vertical position. When DRS opens, the area the flap initially covered is exposed. If this area featured an opening that lead into a duct inside the endplate, when DRS opened the high pressure above the wing would force flow through the duct. With this duct then routed through the car to the front wing, when DRS is open the FDFW would be blown and stall in unison with the rear wing. Clearly when DRS closes the duct would be closed off and the duct would stop blowing the FDFW, restoring front and rear downforce. 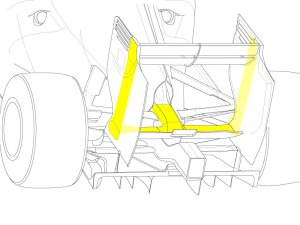 When DRS is open, the duct passes into the beam wing and through the car. Eventually reaching the front wing slot to stall the wing.

Some evidence around the rear wing of the W03 shows this could be possible. We have to be careful to pinpoint every feature on the rear wing as being FDFW related as the DRS mechanism is hidden inside the endplate as well. Some access panels on the wing could be for DRS, FDFW or other purposes, some might be for both. In my research I’ve yet to see a clear high resolution shot of the Mercedes with DRS open, this is unusual as most other teams have been seen with the DRS in effect. Equally clear pictures of the inside of the endplate, where the flap meets the endplate, are in short supply. With this lack of material I can propose a solution, although the actual parts may diffuser is location and appearance. Its expected at this weekend Australian GP the rear wing duct will be exposed as the car uses DRS on the straights. We will need photographers with a big lens and steady hand to catch sharp pictures of the inside face of the endplate, when DRS is activated.

Evidence of the duct can be seen on the car, when the car is not moving. Clearly the W03 rear wing endplate is quite thick, an access panel that houses the DRS actuator is outboard of the flap\endplate intersection, plus there is another panel in line with the beams wings intersection with the endplate. I’d suggest the duct is opened by the flap and hinge plate, the duct then routes through the double skinned endplate down into the beam wing. This then exits through the duct that mounts the beam wing to the gearbox. There’s a tortuous route for the duct through the car to reach the front wing, but this isn’t that dissimilar to the 2010 F-Duct routing. As with McLaren in 2010, the trick is to design the duct into the car at an early stage to minimise losses through the ductwork. This usefully makes it harder, but not impossible to copy. To copy this set up the monocoque needs to be altered and the nose cone needs the apertures into the front wing mounting pylons to feed the airflow into the front wing itself. This requires time to redesign and potentially re-crash test any changes.
But, can this set up be legal? The act of stalling a front wing through a blown slot is legal, although F-ducts are banned, it’s only via the slot in the rear wing that this was achieved. Direct driver intervention is banned, but the driver is allowed to operate the DRS, so any secondary aerodynamic effect of that is not prohibited in the rules.
Although the rules allow this, it’s possible the FIA could issue a Technical Directive on the matter, that any overt secondary effect of using DRS is not allowed and the whole solution could be banned in a stroke.

With a tight and competitive season in prospect qualifying performance will be critical. Notwithstanding the potential structural work to allow the duct to pass through the car, the DRS activated F-duct Front wing is an attractive option for the other leading teams.