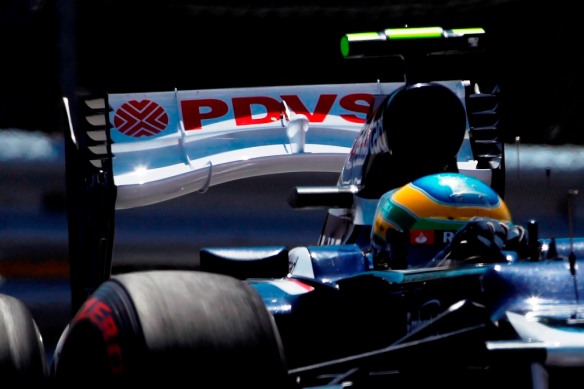 Every year at low Drag circuits some teams will try a more radical way to reduce downforce and drag from their rear wing. It’s rare these solutions get to race, as teams invariable end up running more downforce than the barest minimum these special wings provide. This year Williams bucked that trend and have an all new low drag rear wing. Williams have gone for an opposite strategy to last years (https://scarbsf1.wordpress.com/2011/06/11/renault-wiliams-complex-low-drag-wings-for-canada/) and have created the wings downforce towards the tips of the wing and not the centre.

To do this the wing has a shallower angle of attack in the middle and is steeper towards the endplate.  The middle of the wing is about 30% shallower than at the wingtips.  Both the main plane and flap narrowed in the centre, although the variation in the flap’s height is less than with the mainplane.   In downforce terms there’s probably little to choose between the efficiently of creating downforce in the centre rather than the tips. Although the tips do run in far cleaner air, unobstructed by the top body of the car.  The straighter flap is used as it will flatten out more when DRS is activated.
So in downforce terms the Williams wing seems logical. However loading the wing at its tips creates a strong tip vortice, these are the vapour trails we see in wet races. But these vortices create drag and that will slow the car making the wing inefficient in terms of drag. I can’t understand the reasoning behind this. Perhaps the wake formed by the wingtip in this format work in coordination with the lower rear wing, diffuser and brake duct cascade’s. 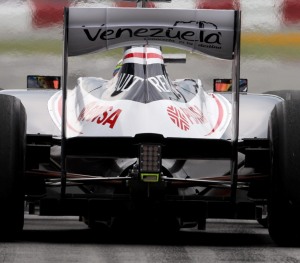