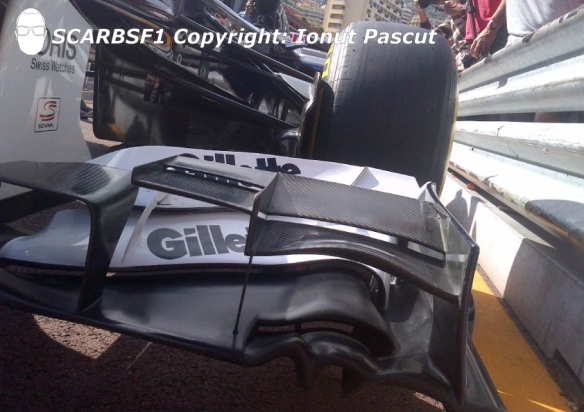 Williams have enjoyed a resurgence this year, with new management, a revised car which now sports a Renault engine and competitive drivers. The FW34 won a race on merit in Spain, with Barcelona being a track well known to be tough on tyres and demanding on aerodynamic efficiency.
I’ve been lucky to have been given permission from Ionut Pascut to post these detailed pictures taken at Monaco, to allow us to take close look at the 2012 Williams. 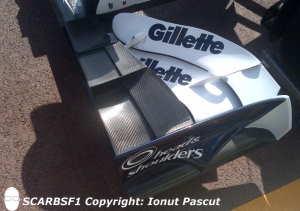 Williams follow the same path as most teams, in that the front wing’s profile diverges in plan view, to create the most load towards the wing tips. Their three element wing follows the common endplate-less philosophy, with a large vane making up the required minimum surface area required for the endplate. This vane also mounts the cascade winglet and the wing sports a McLaren style “r” shaped vane inboard of this. 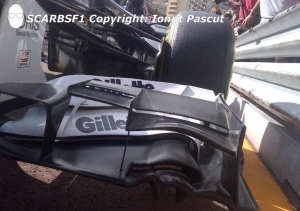 From here though the Williams follows a unique path with a complex third slot made into the wing’s main plane. The wings leading edge arches up to form two tunnels in an “M” shape. The wing then merges with the footplate to form the typical arched shape. This “M” shaped arch leading into the extra slot, suggesting this is the hardest worked section of wing. The inner end of the “M” arch broadly aligns with the inside face of the front wheel. The section of wing outboard of this appears to sweep out to direct its flow around the outside of the front tyre. There’s also a fence beneath the wing to direct the wings wake around the tyre.
It’s interesting to note that although the cascade has two double element winglets, the inner winglet has very little angle of attack.
Williams like several other teams have extended the front wings mounting pylons to form a long vane-like shape. These work along the Y250 axis in conjunction with the turning vanes hanging below the nose cone to direct airflow to the floors lower leading edge. 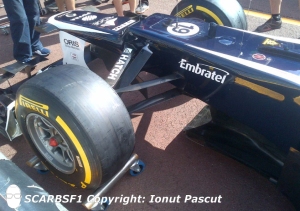 This reverse view behind the front tyres highlights some interesting details. Firstly notice how the step in the nose is very abrupt, the 12cm area to merge the nose into the step does not appear to have been exploited, leading to this sharp step. From this angle we can also see why teams want the chassis as high as possible; the space below the raised chassis creates the least obstruction for the airflow passing through the front wheels and onwards towards the diffuser. The space between the T-Tray splitter and the raised chassis is apparent too, Williams create quite a long vertical section between these two surfaces to split the airflow left to right. Although not very clear in this picture, Williams also have created a small 5cm tall turning vane mounted to the side of the splitter; most teams create a small flow control device in this area. Often the gap between the vane and the vertical side of the splitter is mistaken for an inlet. this vane is used to add some energy to the floor passing along the step in the floor, which would otherwise slow down the flow into the diffuser. 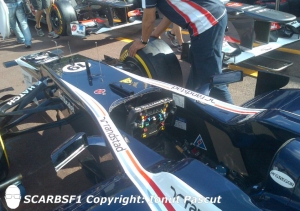 Along the top of the nose teams mount various forms on antennae, for the pit to car radio and telemetry system. The round bulge is the receiver for the car’s GPS. There is also a switch to put the gearbox into neutral (N) and a warning light that KERS is charged. The long thin structure ahead of the cockpit opening is both the front roll structure and the cover for the rearwards facing camera. You can see that a tiny windshield is fitted to reduce the wind buffeting the driver receives. 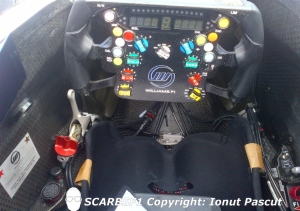 Within the cockpit it’s possible to see how many of the controls have been moved to the steering wheel. To the left of the cockpit are the controls for brake bias, the large lever rapidly switches between 3 bias setting and is often used between corners to set the ideal amount of braking bias for each corner. When we see the onboard shots, this is what the driver is reaching down to adjust. There is also a second dial adjuster for brake bias, this is a finer adjustment to alter braking front to rear. Behind the lever is the data port for the pit systems to connect to the car, with what’s often termed an ‘umbilical’ cable. above this the cover for the connector is temporarily Velcro’d to the side of the monocoque, to prevent it getting lost. In the middle, under the seat is the fire extinguisher, this is a custom moulded carbon fibre part, designed to fit into the “V” formed by the lower section of monocoque. The switch for the fire extinguisher is mounted to the right of the cockpit and is covered by red cone to prevent accidental operation. On the roll hoop there is also another switch for the extinguisher, marked by an “E” decal.
Next to this fire extinguisher button are a few controls to turn the cars power on\off and to turn on the onboard camera. 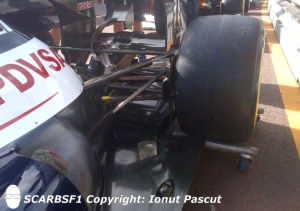 Perhaps the design most unique to Williams is their rear end architecture. Based around the low-line gearbox, the upper wishbone mounts to a vertical keel at the rear of the gearbox case. This structure also now supports a small winglet mounted on an elegant swan neck mount. The resulting void created above the gearbox allows greater airflow to the lower rear wing. Currently Williams have three sidepod\exhaust solutions, a simple rear exiting tail pipe, then this version with the sidepod radiussed around the tail pipe to form an additional cooling outlet. Williams also have tested a McLaren style downwashed side exit set up, first seen in Mugello. As with all teams, the sidepods waist away to the width of the gearbox, to reduce the blockage between the rear wheels. The large expanse of floor belies how slim the sidepods really are. On the floor the bulged object is Infrared tyre temperature sensor; most teams run these sensors in this position. Modern IR sensors can now detect the temperature at three points across the tread, to understand how the entire tyre is being used. 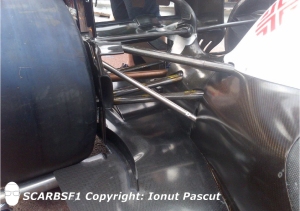 Our last view shows the top of the diffuser and rear suspension in some detail. The diffuser has to start at the rear axle line, the diffuser then expands rapidly both upwards and outwards, this the diffuser actually starts 10-15cm inboard of its maximum permitted width of 100cm. The fence on the floor and the rear brake duct vanes will work to divert the airflow around the gap between the rear tyre and diffuser.
Williams have adopted a pull rod suspension at the rear of the car; this is a development of the system on the car last year. Where as last years top wishbone was “Z-bone” shape which also incorporated the track control arm, this year resorts to a more conventional pair of “V” wishbones and a separate track rod. The extreme angle of the driveshaft is apparent in this view too, the low position of the differential requiring special Pankl tripode joints to transmit the torque from the diff’ to the wheel without undue loss in power.

I’ve previously described the Williams rear wing in this article