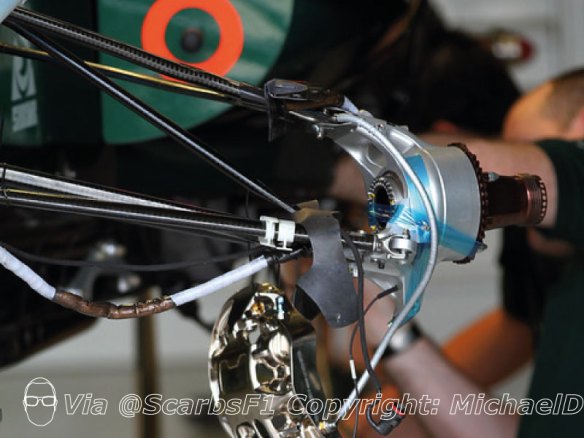 Not everything in F1 is aggressive, extreme, radical or innovative. In fact in many areas the car’s are very close in general design terms. Some times it’s enough just to soak up the detail engineering and explain what all the little bits and pieces do on the car. In this series of short articles, we’ll do just that, thanks to these amazing photographs from MichaelD. Following on from the details of the Force India front corner, with these photos of the Caterham in Melbourne, we can now see more of the upright design.

Caterham’s upright is fairly typical of most contemporary F1 designs. By regulation all F1 cars have to use Aluminum for their uprights. This one appears to be a fully machined or perhaps a cast part. Before the restriction to aluminum, investment cast Ti or MMC were common.
In format the upright is tightly fitted between the upper and lower ball joints and the two bearing for the hub. This design has been common in the past ten years, before that the upright tended to be a larger item with a large vaned housing for the bearing that would be the route for cooling air to reach the brake disc. Now teams route the cooling around the upright rather than through it. One exception of this design practice was Honda who routed the cooling air internally through an oversize hub. This design was dropped in 2010, as the design prevented the lower wishbone mount being as high the aerodynamicists wanted.
The upright creates part of the suspension geometry, with the distance between the upper and lower ball joints and the angle between them and the steering axis.
The first observation of a current F1 upright compared to any other racecar is the distance between the upper and lower wishbone joints. The upper joint is probably as high as the 13” wheel will allow, and then the lower wishbone is raised to near the wheels centerline. Having the mounts close together creates more loads in the wishbones and restricts space for a track rod to be mounted high up, with enough of a steering arm length to be efficient. This is a compromise forced by the aerodynamicists, who require the wishbones to be placed in the most beneficial position relative to the front wing upwash.

Due to the offset of the bulk of the upright from the steering axis, the design at first appears to offer a lot of King Pin Inclination (KPI), but closer examination of the ball joints shows them to be relatively normal for an F1 car. An increased KPI angle creates more camber change through steering.
We can see the upper ball joint (UBJ) that links the upright to the wishbone is created with a clevis bolted the upright. The wishbones outer end holds the spherical bearing. Shims between the clevis and the upright adjust the static camber. The lower ball joint (LBJ) is a fixed mounting and is not adjustable. We can see in the case of the Caterham that the lower end of the pushrod is mounted to the wishbone and the not upright. It joins near the spherical bearing in order to keep the bending load in the wishbone end to a minimum.

The steering rack is mounted low down on the front bulkhead and the track rod passes in line with the lower wishbone and attached to its own clevis on the upright. Adjusting camber also adjust steering toe angle, so any change in the camber shims will require a shim altered on the track rod arm. As the clevis is formed by the upright, the track rod arm is split, with the metal end fitting bolting to the carbon fibre arm, a shim in between this joint creates the difference I track rod length.
In between the track rod and lower wishbone is one of the two tethers to hold the wheel on in an accident; there appear to be plastic clips to hold the tether in place between the two parts. 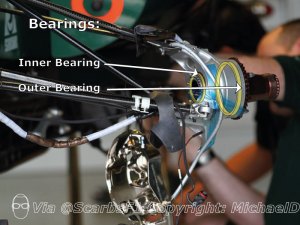 Rotating inside the upright is the front hub, or stub axle. This is a machined titanium part and sits on two bearings. Typically two sets of bearings are used one larger set outboard and a smaller set inboard. From the diameter of the upright you can see the differential in size is quite large. Bearing design is quite secretive, but commonly angular contact ceramic bearing are used. I was told that Honda, who used NTN bearings at the time, would have the bearing last two races and cost several thousand pounds each. Albeit this was at the time they used particularly large bearings to hold the oversize hub. The bearings are located in the upright and the hub and preloaded by the large castle nut visible inboard of the upright.
The hub is hollow and will have openings and pockets machined into it to reduce weight where stiffness isn’t required. The hub also forms part of the brake disc mounting system the wire eroded splined on the flange outboard of the upright mate to matching splines on the brake disc mounting bell. There are also drive pegs to locate the wheel. At the threaded outer part of the hub, the wheel retention system is removed. This is a sprung clip that flicks in\out as the wheel nut passes over it during wheel changes. The clip will retain the nut as required by the regulation, should the wheel nut not be tightened sufficiently. It will however not replace the function of the wheel nut in holding the wheel on securely. Drivers leaving the pits will see\feel the wheel wobble slightly, driving for too long will see the retention mechanism fail and the wheel fall off. Typically the hub and wheel nut threaded are handed left of right, to help keep the nut secured.