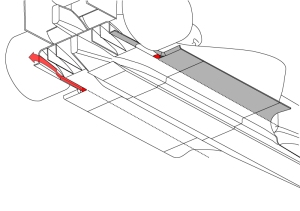 Teams have been adopting exhaust blown diffusers (EBD) since last year and in 2011 every team has exploited the exhaust to some extent to help drive airflow through the diffuser. As I have explained in previous posts on the subject (https://scarbsf1.wordpress.com/category/exhaust-driven-diffuser/), the problem with EBDs is that they create downforce dependant on throttle position, so as the driver lifts off the throttle pedal going into a turn, the exhaust flow slows down and reduced the downforce effect, just at the point the driver needs it for cornering.

If a team want to really exploit the benefits of an EBD then they need to resolve this off-throttle problem. Last year Red Bull exploited a different mapping of the engine when off throttle (see https://scarbsf1.wordpress.com/2010/07/10/red-bull-map-q-the-secret-to-the-teams-q3-pace/ ). By retarding the ignition when the driver lifts off, the fuel is no longer burnt inside a closed combustion chamber, but instead the fuel and air burn in the exhaust pipe, the expandign gasses blow out of the exhaust exit as though the engine is running . This creates a more constant flow of exhaust gasses between on and off throttle. The problem here is that the mapping uses more fuel and creates excessive heat in the exhaust pipe and at the exhaust valve. Renault reported that both Red Bull and Renault used 10% more fuel in Melbourne compared to last year, most likely due to these off-throttle mappings.

With these off throttle mappings the fuel burns in the exhaust pipe, not the cylinder

As the engine suppliers have become increasingly comfortable with the heating effect of these off throttle mappings, teams have been able to use more of this effect in the race. One of Red Bulls advantages this year according to McLaren is their use of aggressive engine maps for downforce. At the Turkish GP several people pointed out the engine note on the overrun on Alonso’s Ferrari during FP2. Teams have clearly started to drive the engine quite hard when off throttle, to keep the diffuser fed with a constant exhaust flow.

Now the FIA have stepped in to limit this effect. Although initially scheduled to be in effect from this weekends Spanish GP the change will now take effect after Canada. This clarification is based on Charlie Whitings changing opinion of how these mappings are used. At first some mapping was allowed, but these increasingly aggressive and fuel hungry mappings are changing the engines primary purpose. Effectively when off throttle the engine is being used purely to drive the aerodynamics, this contradicts the regulation on movable aerodynamic devices. Although this is a vague interpretation it can be justified.

Now with the throttle closed to 10%, the amount of fuel that can be burnt will be limited and thus the blown effect will be reduced. so drivers see will a bigger variation in downforce as they modulate the throttle pedal, making the car less predictable to drive.

All teams will be affected to some extent, however the more aggressive that teams have been with the exhaust position relative to the floor, then the greater they will be affected. From the start of the season Red Bull, Ferrari and McLaren have blown the exhaust at the outer 5cm of diffuser. this area is allowed to to be open and bow the exhaust gas under the diffuser for greater downforce. these designs will be most greatly affected by the clarification. Renaults Front Exit exhaust is also likely to be a victim of the change. Many teams have been developing Red Bull Style outer-5cm EBDs, such as: Williams, Lotus, Virgin, Sauber, While Mercedes are rumoured to be adopting a front exit exhaust. These may to need be shelved after Canada, in order to employ a less aggressive EBD.